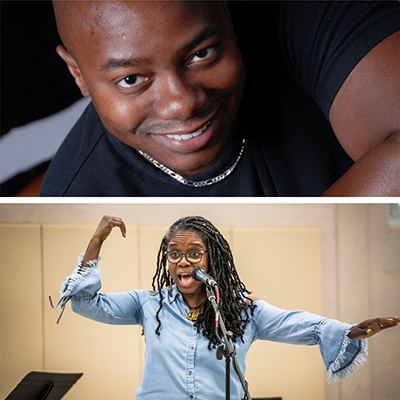 The "Japanese teacup philosophy" . . . "what you're supposed to do versus what you need to do" . . . "cross out the one that's different" . . . the "postcard challenge." During his January 13 presentations tailored to Pingry's Lower, Middle, and Upper School students, Dr. Mykee Fowlin—actor, poet, storyteller, and psychologist—touched on these concepts and others as he paid tribute to the legacy of Dr. Martin Luther King, Jr.

Even though the specific content was different for each audience, Dr. Fowlin touched on the overarching themes of inclusion, kindness, and impact of one's actions on the world. His introduction for each age group included his "Japanese teacup philosophy": a lover of sushi, Dr. Fowlin always wondered why Japanese teacups have no handles. So, once, in a sushi restaurant, he asked the waiter, "What's wrong with your teacups?" Rather than yelling or otherwise causing a scene in response, the waiter smiled, laughed, and said quietly, "If it's too hot to hold, it's too hot to drink." Dr. Fowlin used this story to illustrate the idea of handles vs. temperature (a person's external appearance vs. their internal story) and to illustrate what he wants more of: conversations that push people beyond their comfort zones.

Common to each assembly was a group of three characters created by Dr. Fowlin (he discovered his talent for voices at a young age):
· First, the extremely talkative, free-minded six-year-old Germaine, who attaches power to words.

· Second, outstanding Rutgers football player Octavius who, through a college course about death, realizes that he doesn't want his football skills to be his legacy. Rather, through a combination of his three heroes—his father ("There are people in this world who don't need you to stand up for them, but they do need you to stand up with them"), his high school football coach ("what you're supposed to do versus what you need to do"), and his younger brother who has autism—he decides to enter the military, pursue a master's degree, and open a camp for children with disabilities so they have space to feel safe and included.

· Third, Benjamin, who answers a question that has always bothered Dr. Fowlin: "Since we're all different people, why do we hate different people?" Benjamin tells the story of his first-grade teacher who taught how to hate by giving each student a sheet of paper with various images, then these instructions, "Cross out the one that's different."

Dr. Fowlin also shared the relevant science behind an oyster and its pearl. An oyster must experience pain to turn a grain of sand into a pearl, but that's not the end of the process—someone must open the oyster and take the pearl or else the pearl has no value. Similarly, people can transform their pain into a pearl as a positive outcome for others.

Other messages from Dr. Fowlin's assemblies:
Lower School:
"We're not as limited as people make us out to be."

"It's not just what you're given, but what you do with what you've got."

"Take the postcard challenge—show kindness for someone else so they know they're not alone."

Middle School:
"There are common human stories that we don't talk about. We can bridge the gap between that which divides us."

"Take the postcard challenge—in the spirit of MLK Day, focus on the temperature of a person and not the handle. Make people feel less alone."

Upper School:
"Don't be afraid of life choices because of what others think."

"There can only be one of you, just like there was one MLK. Who are you? What is your dream?"

"We were all left to contemplate what it means to stand up alongside others and shape our character by prioritizing what empowers us over what traps us. It was, by far, the most creative and engaging MLK Day Assembly I've seen; we learned so much by simply engaging with different perspectives."
- Olivia Telemaque '22, Honor Board Chair

"Dr. Mykee's use of various characters was really important because it gave a sense of a universal experience rather than an individual one, which I thought helped relate to a lot more people."
- Luigi Zavala '23


Lower School
In "Freedom Stories," storyteller TAHIRA connected the legacy of Dr. King's leadership in the civil rights era to an event that centered on the experience of a child who was about the same age as Pingry's K–2 students. She brought the story of Ruby Bridges to life through song and movement, keeping students engaged while learning about a remarkable child who demonstrated resilience and kindness during a pivotal time in our history.

"I learned that, if you stand up for people, you are a leader."

"We can have differences, which are good! We can celebrate our differences."

"You sometimes have to ask someone how they feel."