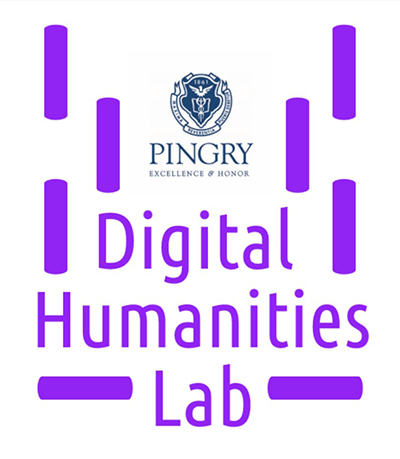 Participating in a 2018-19 Humanities IRT (Independent Research Team), followed by a summer internship in the Pingry Tech Department, proved to have a lasting impact on Noah Bergam '21, Justin Li '21, and Julian Lee '21.

During their internship, they developed an app—coding it from scratch, using Python and HTML—to help students when writing essays about literature. The Digital Humanities Lab provides detailed statistics about a certain text or multiple texts. The original inspiration was last year's IRT, which used these types of analyses in their work; Noah, Justin, and Julian believed it would be helpful to create a website that can make these tools more accessible and user-friendly to the general public.

"The app is meant to broaden the scope of textual analysis beyond direct quoting and make attributes like word frequency and sentence structure more accessible as evidence in critical essays," Noah explains. "For example, to prove that 'light and dark' is a prevalent theme in a given work, it could be useful to have a graph showing where words related to those themes show up."

The thought is that, by highlighting these patterns, students can make discoveries about the works in question. They simply need to upload a text version of the book(s); the works already available on the website under "Pingry Texts" are exclusive to Pingry courses.

Noah, Justin, and Julian not only created the app, but also received national recognition for it, winning the New Jersey 7th District's Congressional App Challenge, a competition designed to encourage student participation in computer science and coding. In February, they demonstrated the app to New Jersey Congressman Tom Malinowski, who represents the district. "Congratulations to our winners who have created an app that will be useful to students across the world," said Congressman Malinowski in a press release. "A solid STEM education has become essential in today's world, and I'm proud that this competition encourages students to build on those skills."

Along with meeting Representative Malinowski, Noah, Justin, and Julian were invited to attend #HouseOfCode in Washington, D.C., for the winners of the challenge (it was cancelled due to the COVID-19 outbreak). They have also been accepted to present the Digital Humanities Lab this fall at the New Jersey Institute of Technology's Digital Humanities Showcase.

The students plan to release the app in full to the School and greater public in the fall, after adding more functionality and doing more bug testing.