Kicking off the National Letter of Intent (NLI) signing season, three Pingry seniors recently marked their formal commitment to pursue their education and athletic careers at three different Division I schools. Approximately 20 more college-bound athletes from the senior class expect to compete for Ivy League and Division II and III teams, and are awaiting their December early decisions.

We look forward to updating the Pingry community in the spring with the full list of college-bound athletes. In the meantime, if you're curious, read last year's article, in which 30 student-athletes headed to college teams.

Pingry's 2020 NLI signers are as follows: 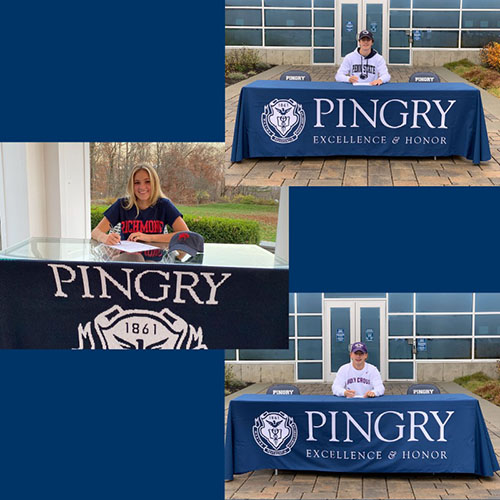 Kevin Parnham—Penn State—Lacrosse
Four-year varsity starter and senior captain of the Boys' Varsity Lacrosse Team, Kevin helped Big Blue to its fourth straight Non-Public B State Championship title in 2018. A defender, he was named to NJ.com's list of Top 50 Freshmen and Top 100 Sophomores, and made the 2018 and 2019 All-State Second Team as a freshman and sophomore. He earned a #48 recruitment ranking for the Class of 2021 by Inside Lacrosse.

"Kevin is one of top recruits in the nation due to his strong athletic skills and his intensity on the field. He brings his relentless defensive pressure to the field every day. He is the only four-year defensive starter I have ever coached at Pingry. I look forward to seeing him compete in the ultra-competitive Big Ten conference."—Mike Webster P '24, '27, '27, Middle School History Teacher and Head Coach of the Boys' Varsity Lacrosse Team


Elle Dziadzio—University of Richmond—Soccer
A senior captain and four-year starter on the Girls' Varsity Soccer Team, Elle was integral to the team's back-to-back, 2018 and 2019 Non-Public A State Championship titles. In 2019, she earned all-conference honors, and in 2020 was named to NJ.com's list of Top 50 Girls Soccer Defenders as well as their Top 85 Girls Soccer Seniors. She was also recently named a Skyland Conference Defensive Player of the Week. Elle will play defense for the Spiders.

"Elle is an extremely intense competitor as well as a natural leader. She is arguably the toughest player to come through the Pingry program during my tenure, and she will be leaving giant shoes to fill in the back. I am, however, extremely excited to follow her collegiate career, as I'm sure it will be filled with much success. Richmond is certainly lucky to have her!"—Lauren Molinaro, Head Coach of the Girls' Varsity Soccer Team


Calahan McPherson—College of the Holy Cross—Lacrosse
A four-year letter winner in lacrosse and ice hockey, Cal—captain of the Boys' Varsity Lacrosse Team—helped the team to win the 2018 Non-Public B State Championship, its fourth straight state title. On the ice, he also helped the team to win two back-to-back Skyland Conference Championships (2019 and 2020), was named an Under Armour All American on Team New Jersey as well as an NJ.com Player to Watch in 2018 and 2019. He will play midfield for Crusaders.

"Calahan is a great worker and has tremendous spirit to go along with speed, quickness, and stick skills. He enjoys hard work. His face is always smiling when the going gets tough as he never shies away from a challenge. He brings out the best in his teammates as they see his willingness to work hard. He is a great teammate and a great leader."—Mike Webster P '24, '27, '27, Middle School History Teacher and Head Coach of the Boys' Varsity Lacrosse Team