Nearly 45 years ago, Rich Freiwald P '03 attended a symposium, "A Century of Ceramics in the United States," at the Everson Museum in Syracuse, NY. Little did he know that, one day, his art would be inside. "For my art—for ceramics—Everson is the ultimate destination," he says. "I never dreamed that one of my pieces would be in this museum. I reacted in disbelief. It's very, very cool!" 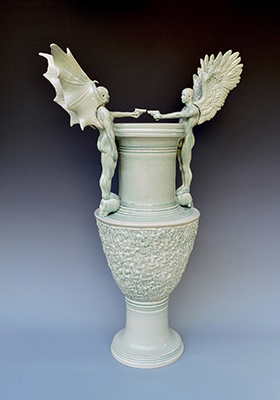 He may not have dreamt it, but it came true. The 32-year Pingry visual arts teacher and award-winning ceramicist's 30-inch-tall glazed porcelain sculpture Stand Your Ground (2016-17) was recently purchased by the Everson Museum for its permanent collection—and, as it turns out, is displayed next to the work of Ka Kwong Hui, Mr. Freiwald's professor at Rutgers University.

Who is to thank for Stand Your Ground coming to the museum's attention? Garth Johnson, the museum's Paul Phillips & Sharon Sullivan Curator of Ceramics, who saw the piece several years ago at a ceramics conference in Pittsburgh. "The Everson loves to find contemporary pieces that shed light on the pieces in our permanent collection," he says (the museum purchases about a dozen ceramic works each year). "Stand Your Ground is both a Neoclassical piece and a piece that dovetails with the history of artists creating major statements for World's Fairs and other expositions. Porcelain is also a demanding medium—this piece is a great combination of technical bravado and political/emotional content."

Mr. Freiwald's piece is also part of the museum's exhibit "Renegades and Reformers: American Art Pottery"—the most recent of many exhibits of his art. "We put it on display alongside works by Adelaide Robineau [whose ceramics were the first ones purchased by the Everson, in 1916] and George E. Ohr, the Mad Potter of Biloxi [MS]," Mr. Johnson says. "The exhibition hones in on character traits that connect potters from the golden age of American Art Pottery with contemporary makers. Rich's piece contains elements of both—it is a protest pot in the service of broader societal reform."

Stand Your Ground is in the shape of an amphora, which Mr. Freiwald says goes against current ceramics trends "because it's a classical form, which now seems outdated." His approach to the piece was multi-faceted. "It's a beautiful object, looks very strong, has beautiful color, but it's disconcerting when you realize what it's about—the standoff between good and evil, with an angel and devil whose eyes, ears, and hearts are missing. They can't see, hear, or feel. The skulls down below represent victims of humankind. But I didn't want the piece to be bloody. I wanted it to have a classicism."

"Renegades and Reformers: American Art Pottery" is on display until July 5 at the Everson Museum.