In keeping with Dr. Morris's signature "surprises"—once-a-trimester diversions, which she launched this school year—Lower Schoolers had something special in store when they arrived on campus Wednesday. 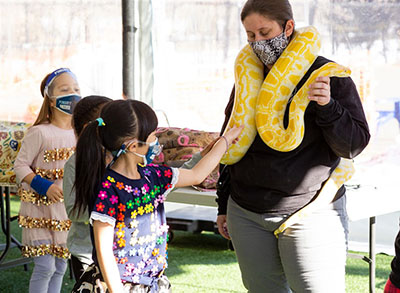 The animal entertainers featured prominently in a presentation given by Erin Mellini, owner of Snakes 'n Scales, a local animal rescue and educational organization. In collaboration with the PSPA, Dr. Morris invited Ms. Mellini to the Short Hills Campus to share her knowledge, give students a first-hand glimpse at an array of reptiles, and, in her words, bring a little fun and joy to an otherwise challenging year.

The presentation—which took place in one of the campus's heated, outdoor tents—was given in four separate, 40-minute sessions, allowing K-5 students to be grouped by grade and physically distanced (some grades were combined). None the wiser, students excitedly took their seats and awaited the four reptiles, each of which was kept hidden in a plastic storage container until their unveiling.

First came Kernel the corn snake, a New Jersey-native who, like others in his species, dines on rodents. In fact, Ms. Mellini explained that were it not for corn snakes, the ground would be teeming with mice and rats, making outdoor recess a tricky affair.

Then came Lillipop the blue-tongued skink, a type of lizard. His claim to fame, as Ms. Mellini shared, is his ability to "drop" his tail in an effort to distract predators when danger strikes. Which is precisely what happened when his previous owners, hosting a house party, discovered his tail lying on the floor, quite separate from Lillipop himself. A guest had accidentally stepped on him and, yes, in full self-protection mode, off popped his tail. It grew back a year later, but not before the family handed him over to Ms. Mellini, fearing they had broken him. 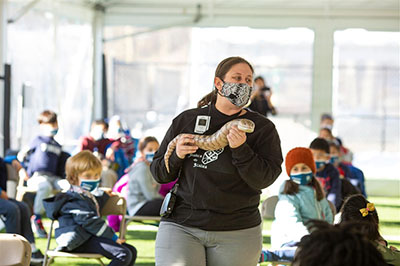 Next was Frank the tortoise, all 15 years and 40 pounds of him—a mere baby, as Ms. Mellini shared, as tortoises can live to be up to 150 years old and 100 pounds. Giggles erupted when she demonstrated how, unlike turtles, tortoises can't fully retract into their shells; only their heads hide inside. She also explained his love of strawberries, to which Frank responded with an unabashed "strawberry dance," swinging his arms and legs around for the students. Tortoises, unlike turtles, are vegetarians, which was problematic for Frank, whose previous owners claimed hot dogs were his favorite food. Thankfully, under Ms. Mellini's care, he discovered strawberries, among other fruits and vegetables, and his health was restored.

The final featured guest was the impressively large and intimidating Lemonhead, a Burmese python. One of the longest snakes in the world, pythons can grow to be hundreds of pounds. Thanks to a jaw that dislocates, they can also swallow their food whole. Lemonhead, like most pythons, are frequently misunderstood, Ms. Mellini explained. "Just because he's big doesn't mean he's bad," she told the students. "Animals don't do things to be mean. They bite because they think they have to."

Thankfully, Lemonhead was feeling quite at home among Pingry Lower Schoolers, and even allowed them to pet him as they exited the tent.

It was a fitting end to her presentation, empowering students with a bit of knowledge, compassion, and respect for reptiles, much like the Lower School's Code of Conduct asks of students. What's more, she imparted the lesson that not all animals—even those that seem fun and interesting—make the best pets.

As Ms. Mellini expressed, "Every animal, whether it's cute or not, is important. Our job is to make sure we're good citizens of the planet, to make smart choices in order to take care of them."