A stand-out runner at Ursinus College, Mr. Grant joined Pingry's faculty in 1984, the same year as his wife, English Teacher Vicki Grant. Five years later, he took the helm of both the Girls' Cross Country and Track & Field Teams. Beginning in 2001, he guided the cross country program to five state championships, in addition to six Prep Championships between 1992 and 2004. He has shepherded numerous runners to Division I and III collegiate careers, including several who went on to earn NCAA All-American status. In recognition of his outstanding coaching career, Mr. Grant was inducted into the New Jersey Scholastic Coaches Association Hall of Fame in 2010, and was selected as the Star-Ledger Coach of the Year in 1999 and 2003.

"Cross country teams are so close and I will always have wonderful memories of my 'adopted' daughters. We accomplished so much together," shares Coach Grant. 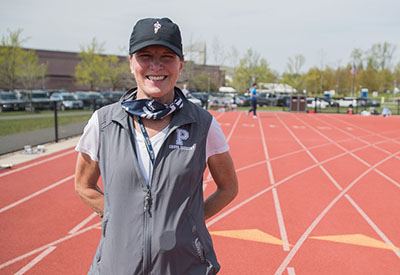 A former elite distance runner, Coach Christensen is, in the words of Director of Athletics and Community Wellness Carter Abbott, "a mainstay of Pingry's running programs." In the fall of 2010 she began serving as an assistant coach with the Girls' Varsity Cross Country Team. That winter, she helped coach the boys' and girls' distance runners on the Winter Track & Field Team and, the following spring, began working with the Middle School running program as well as the girls' distance runners for the Outdoor Track & Field Team. In the fall of 2014, she became the Head Coach for the Middle School Cross Country and Track & Field Teams.

A student at the University of Pennsylvania during the early Title IX era, Coach Christensen was part of their women's cross country and track & field programs when they transitioned from merely club teams to official NCAA teams. She suffered some injuries in college, but broke out on the professional running scene soon after, while living and working in New York City. After placing 10th in the 1981 New York City Marathon, she earned an Adidas sponsorship and was invited to run at several international races, including the 1982 Women's International Marathon Championships in Japan, where she placed eighth. In 1984, while applying to business school, she qualified for and competed in the first-ever women's Olympic Marathon Trails, held in Olympia, Washington. Running a PR of 2 hours 36 minutes, she finished just five minutes behind running legend Joan Benoit.

Deciding to pursue professional ambitions, she went on to a successful investment banking career. In 2009, she decided to step away from her career and, joining Pingry coaching staff a year later, rediscovered her love of sport under the tutelage of Coach Grant. Among many Big Blue highlights, she cites helping the record-smashing girls' 4x800-meter relay team—comprised of Nicole Vanasse '20, Avery Schiffman '18, Cathleen Parker '19, and Ryan Davi '21—qualify for Nationals in 2018 (they ultimately placed ninth, in 9:15.05, setting yet another school record). Of her coaching philosophy, she says, "I hope the kids learn how to get what they want from running, to gain confidence from setting and achieving goals, and, finally, to realize it can be a lifetime sport," she says.

Ms. Abbott is certain the transition will be a seamless one. "Coach Christensen has been such an important part of our running programs at Pingry over the last 10 years. She brings top-level coaching while forming great relationships with students to help them reach new levels of excellence. We are thrilled that she has agreed to become our next Head Coach."

Thank you, Coach Grant, for your three decades of commitment to Big Blue Cross Country, and welcome, Coach Christensen!

To read more about Coach Christensen, see the Winter 2019-20 issue of The Pingry Review.