The Pingry School
'Respect Each Other' Is Maud Peper Dahme's Message from John Hanly Lecture
gwaxberg
Nov 22 2021 9:47 AM 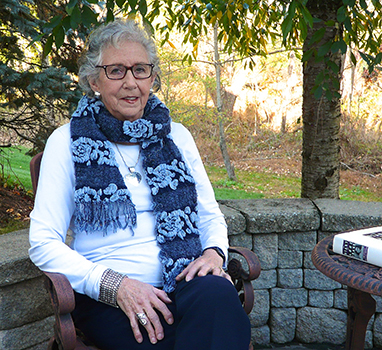 Two questions set the scene for this year's John Hanly Lecture on Ethics and Morality, as Pingry welcomed Holocaust survivor Maud Peper Dahme ("DAH-mee"), author of Chocolate: The Taste of Freedom: The Holocaust Memoir of a Hidden Dutch Child.

The questions were posed by Gail Hirsch Rosenthal, Director of the Sara and Sam Schoffer Holocaust Resource Center at Stockton University. First: In our universe of obligation, who is in our community? Is it our next-door neighbor? Someone within a five- or 10-mile radius? Perhaps someone who lives overseas? Second: Who is a Holocaust survivor? This question has an answer—anyone, regardless of age, who was forced to flee in Nazi-occupied Europe from 1933–1945, whether by hiding, obtaining a Visa to leave, or joining a fighting group.

As indicated by the title of her book, Ms. Dahme is from the Netherlands, which was considered a haven for Jews because of its neutrality during World War I. But in May 1940, Germany invaded the country, leading to many restrictions against the Jews. A year later, when Ms. Dahme was five, she was excited to start Kindergarten at a nearby public school, and her teacher happened to be a Jewish refugee from Germany. But it wasn't to be. School ended because of a new restriction that no Jewish child could attend public school—they had to attend school for Jewish children. By the following spring, of 1942, another regulation was in place: all Jews who were six and older had to wear a yellow star on their clothing.

The Jews soon learned they would be taken east, by train, away from the war scene. But on their own, Ms. Dahme's parents learned not to get on the train, and they also found out that an effort was underway in the Netherlands to find Christian families who were willing to hide Jewish children (non-Jewish individuals who risked their lives to save Jews from extermination would later be honored by Israel as "Righteous Among the Nations").

So, Ms. Dahme—who had to protect and take care of her younger sister Rita, like a mother—began a scary journey. They were taken to a farm and, later, a house with a deeply religious Christian family (after church one Sunday, they visited the mother's sister on another farm, and Ms. Dahme happened to be reunited with her Kindergarten teacher!). During the first night in hiding, Ms. Dahme was told that she must remember—or else they would be taken away and killed—that she and her sister would be identifying as the couple's nieces, taking the couple's last name, and changing first names. Unfortunately, at some point, someone revealed the sisters' identities, so in 1944, they were moved to a small fishing village, where a second family agreed to hide them.

Then came the day in April 1945 when the village was liberated by Canadian soldiers—who brought rations. At the age of nine-and-a-half, Ms. Dahme had a new experience when the family's daughter shoved what Ms. Dahme called "this brown thing" into Ms. Dahme's mouth. "It was chocolate and I've loved chocolate ever since." Her first taste of freedom was chocolate, hence the title of her book.

Why does Ms. Dahme tell her story? She places it in the context of bullying and other atrocities in today's world. "Genocides still continue this very day, all [because of] ethnic and religious differences. It is important to understand how people cared so much to save people and risk their own lives. Respect each other . . . We're all human beings. People saved others because we were human beings," she said. "Hitler did not succeed with my family. I am so thankful forever to the people who saved my sister and me, and to the friends who hid my parents for three years in an attic. Our family tree has continued to flourish."

Ms. Dahme believes strongly that people need to care for each other. "I wouldn't be here today if people—total strangers—hadn't risked their lives to care for my sister and me. Respect each other for who they are." In a brief Q&A with Pingry's Honor Board, Ms. Dahme also spoke about forgiveness (not holding anything against today's German population) and being thankful for what she has.

The John Hanly Lecture Series was established in 1999 on the occasion of former Headmaster John Hanly's retirement, in recognition of his commitment to teaching students and other members of the school community how to make life's decisions within an ethical framework. The Fund enables Pingry to bring in a variety of speakers to campus to address the moral and ethical issues facing all of us in the 21st century.