The lack of snow this winter has done little to slow down Pingry's ski racing teams. During a regular season that included three giant slalom and three slalom races at Mountain Creek against up to seven other schools in the state, the girls skied their way to four outright wins and the boys secured six second-place finishes (the top four combined times of a two-run race determine team finishes). 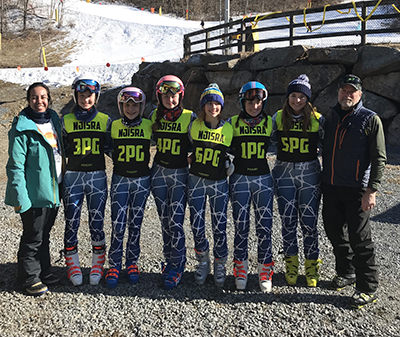 Notable performers include captain Rosemary Collins '21, who took first in three of the six races and had a podium finish in all the rest. Teammates Camille Collins '23, Ann-Sophie Kraemer '23, and Annabelle Collins '23 also routinely finished in the top 10.

On the boys' side, captain Matt Dispenza '20 earned top billing in three of the races, and had a podium finish in five.

Just two years ago, when the girls' team last won the non-public state title, it was an achievement simply to advance to states as a team. Their top finish at the tournament this year shows how far they have come. And, because three of their top skiers are freshmen, their success looks to have longevity.

Thanks to their finish at states, Rosemary, Camille, Ann-Sophie, Peter McClearn '20, Tobey Jay '22, and Matt all qualified to compete in the Race of Champions (ROCs) on February 24, comprising one of the largest fields of Pingry skiers at ROCs in recent program history. Rosemary took second overall in the state, while Ann-Sophie placed 12th. On the boys' side, Matt took fourth and Tobey, 10th. 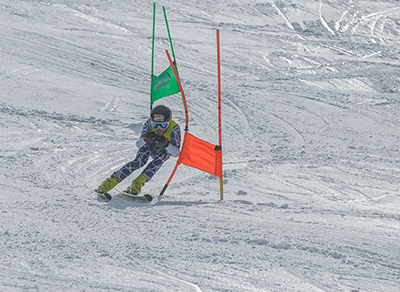 Based on their performance at ROCs, Rosemary, Camille, Ann-Sophie, and Matt qualified to compete at the Eastern States Championships in New Hampshire on March 7.

"We are really proud of how hard the kids worked this season. Their spirit and resilience in the face of tough competition was incredible to watch, especially this past weekend," said Head Coach Jim Backman, in his second year with the team. "They worked hard together as a team, overcame some minor obstacles, but in the end their talent, training, and perseverance took them to the podium. It has been a real pleasure to be a part of this team."

Rosemary is equally proud. "It was amazing to see the hard work that all of our athletes have been putting in all season culminate in such success. Over the three years on which I've been on the ski racing team I have seen tremendous growth, both in ability and in spirit from our athletes, and our results this last week are proof of that. We left the state championships with four big trophies—winning the Giant Slalom Championships and non-public title, and getting second in the Slalom Championships and second overall in the state. This was amazing for us and for Pingry, as our team has not been this talented or successful in a long time. I'm incredibly proud of this team and I know that this is just the beginning for us. I'm so excited to see us take this momentum and continue to grow next season."

Congratulations, Big Blue skiers, and best of luck at Easterns!

Read NJ.com highlights from the state championships here and here.