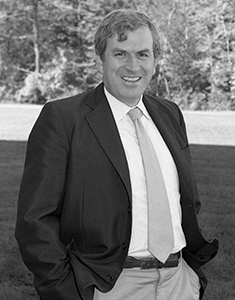 John Hanly, Pingry's beloved 13th Headmaster from 1987-2000, who championed ethics, the arts, and a commitment to intellectual rigor, and was a fan of Big Blue athletics, passed away on August 23, 2020, after a lengthy illness.

"From my first step on campus, I have been regaled with stories of John Hanly as a leader, as a person, and as the embodiment of the Honor Code at Pingry. He helped shape Pingry as it made its way toward the end of the 20th century, with a huge emphasis on character, community, and the common good. He touched hundreds of lives and left a part of himself in each and every person with whom he came in contact. Helping to found New Jersey SEEDS (Scholars, Educators, Excellence, Dedication, Success), after having worked at Prep for Prep in New York City, John cared deeply about educational access and equity, a legacy we are committed to carrying on today," said Head of School Matt Levinson.

Born in Wales and educated mostly in England, Mr. Hanly attended Stonyhurst College in Lancashire, UK, and received B.A. and M.A. Degrees (with Honors) in English Language and Literature from Oxford University. He also received an M.A. in Educational Administration from Teachers College, Columbia University. An English teacher, his early experiences included teaching English to foreign students ages 15-19 at St. Clare's Hall in Oxford, UK; serving as Head of the English Department at Audley House School in Bicester, UK; and being an Examiner in "O" level English language for the Cambridge University Examination Board (now known as Cambridge International Examinations). Prior to his arrival at Pingry, he worked for 19 years at Trinity School in New York City in a number of different roles, including as an English teacher for Project Broadjump (weekend and summer program for urban students), an English teacher for Grades 5-12, Head of the Middle School, Assistant Headmaster/Head of the Upper School, and Interim Headmaster.

At Pingry, Mr. Hanly's earliest accomplishments included his focus on hiring dynamic young teachers, his creation of three divisions to promote community on the Bernards Township campus (Grades 7-8, 9-10, 11-12; Grades 9-12 since returned to being one division), and making sure that ethics permeated the entire Pingry community.

Facing the challenge of student apathy toward the Honor Code, he raised and addressed ethical issues during all-school, faculty, and parent meetings; introduced and taught a junior/senior elective about ethical dilemmas; and initiated a School-wide review of the Honor Code by a committee of administrators and student government to determine how to integrate the Code into daily student life. A major result of the review was the formation of the student-run Honor Board. In addition, the requirement to report an offense was removed, the wording of the Honor Code was revised to apply to both men and women (1988), and the Code of Conduct, a version of the Honor Code simplified for younger students, was introduced at the Lower School (1994).

Another hallmark of Mr. Hanly's tenure was his emphasis on the arts. He added three drama courses and a tutorial program in playwriting, the Attic Theater became a home for drama classes and small productions, and the extracurricular drama program expanded. He bolstered the visual arts program to include drawing, painting, photography, pottery, and filmmaking; introduced dance in 1994; and led an effort to showcase more school music, both during the Winter Festival and AFS concert. By 1997, all three departments—visual arts, music, and drama—boasted larger arts faculty and more course offerings as part of the curriculum. Although he left Pingry three years before it opened, the Hostetter Arts Center can be seen as a realization of Mr. Hanly's vision for the arts at Pingry.

Many in the community describe Mr. Hanly as a gifted speaker, and he was also fondly remembered for wearing a pink sweater to field hockey games. Other school traditions and initiatives established during the Hanly years were Convocation (1987), summer fellowships for faculty professional growth (1989), Monday assemblies, a computer center (Pingry entered the digital age in 1996-97 with Internet and email access), and a more formal Community Service program, which requires students to complete 10 hours annually. By 1996, nearly 10 years into his tenure, Mr. Hanly had significantly increased the number of women in leadership positions as department directors.

Pingry became accessible to a more diverse range of students in the early 1990s, when Mr. Hanly, in collaboration with others, conceived of New Jersey SEEDS (Scholars, Educators, Excellence, Dedication, Success) to prepare motivated, high-achieving, low-income students for admission to independent schools across the country. Since 1993, Pingry has been a SEEDS partner school, offering its campus for SEEDS preparatory programs. Mr. Hanly was a SEEDS Trustee and then named Trustee Emeritus. His other professional affiliations included Secretary and President of the New Jersey Association of Independent Schools; Trustee of St. Philip's Academy; and member of The Country Day School Headmasters' Association of the United States and The Head Mistresses Association of the East.

In 1995, toward the end of Mr. Hanly's tenure at Pingry, the School embarked on The Campaign for Pingry with a five-year goal of $40 million. At the public Campaign launch in 1998, Mr. Hanly remarked that the School needed funds "to provide our students with an even better education than we do now." At that time, Pingry's Campaign was the largest among all independent day schools, and with $23 million raised for endowment for financial aid and faculty support, Pingry was able to increase its endowment from less than $5 million (1987) to nearly $45 million (2000), which was critical to the school's future success. Through many people's efforts, but particularly Mr. Hanly's, Pingry surpassed its Campaign goal by nearly $5 million. Among the Campaign outcomes were an increased endowment, a robust Annual Fund, and upgrades of both campuses, including the Arts Center, a new fitness center, a modernized baseball field, and renovations of the Lower School building with a new library, new classroom wing, and a playground dedicated to Joyce Hanrahan.

In 1997, Pingry honored Mr. Hanly with The Cyril and Beatrice Baldwin Pingry Family Citizen of the Year Award, which recognizes "members of the Pingry family who, in rendering meritorious service to the community, have demonstrated those qualities of responsible citizenship that Pingry aspires to instill in all of those associated with the school." In March 1999, Mr. Hanly announced that he would be retiring. To ensure his legacy, donors established a scholarship fund, a lecture series, and a faculty mentorship fund in his honor. The John Hanly Scholarship Fund provides full and partial financial aid to individuals who best exemplify the qualities that he asked students to strive for—academic excellence, commitment to community, respect for and service to others, and ethical behavior. The John Hanly Lecture Series on Ethics and Morality celebrates Mr. Hanly's commitment to teaching students and other members of the school community how to make tough decisions within an ethical framework, and enables Pingry to bring a variety of speakers to campus each year. The John Hanly Fund for Faculty Development ensures the effectiveness of Pingry's faculty through continued professional stimulation and development.

Mr. Hanly will be fondly remembered by the Pingry community—students, teachers, parents, alumni—all those whose lives he impacted not only as Headmaster, but through his subsequent visits to campus. The 2000 Blue Book is dedicated to him—in an edition themed "outer space," the yearbook staff describes him as "the 'central light' of our school, the 'radiating star' of our community . . . a supernova of a teacher. He has taught us important lessons for life, in and out of school, and values that will be forever imprinted on our hearts and in our memories."

Thanks to The Greatest Respect: Pingry at 150 Years for much of the information in this article.