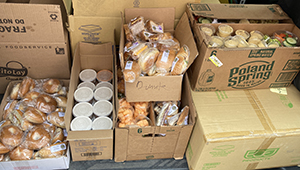 Pingry and its Director of Community and Civic Engagement, Shelley Hartz, have been honored by Bridges, a non-profit organization that brings weekly donations of food, clothing, and more to the homeless in New York City, Newark, Irvington, and Summit.

The organization presented Pingry with the Bridges Community Award, given to "those persons or organizations who have consistently demonstrated passion, dedication and extraordinary action in support of our efforts to end homelessness. The recipient will have given time, products, and/or funds, and they have done so for the single purpose of making a difference."

Pingry, which has a 10-hour-per-year community and civic engagement requirement for all students in Grades 7–12, received the award for its long-term commitment to Bridges and its efforts during the past school year to provide food during the pandemic. Specifically, every Friday that Pingry was open, the School provided Bridges with fresh, single-serving, pre-packaged leftovers of vegetables, hot dishes, and sandwiches. 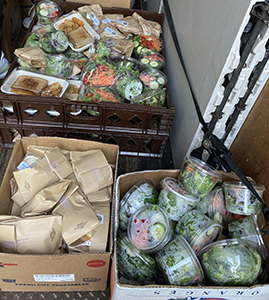 "People ate well because of Pingry," the organization said. "Shelley Hartz coordinated this effort. She is the community connector at Pingry. For years, she has inspired students to give while educating them about making connections and finding equity in the work. "

Ms. Hartz credits the efforts of SAGE Dining Services (Pingry's food service), SAGE's General Manager Michael Ciampa, and Alex Nanfara, Pingry's Summer and Auxiliary Programs Marketing and Communications Director, with making the donations happen. In the fall, Mr. Nanfara had the original idea based on an extra side salad from lunch.

"I asked Shelley if we could take all of SAGE's pristine leftovers that are basically already in to-go containers, and deliver them to those in need," Mr. Nanfara said. Mr. Ciampa and his staff graciously agreed to allocate resources to gathering the food, approximately 200 pounds per delivery.

"We don't often think about how departments interact that wouldn't normally interact," Ms. Hartz said, referring to Mr. Nanfara, Mr. Ciampa, SAGE, Bridges, and herself. "Pingry came together as a community. We have community outreach here—we look at what we have and what we can share."