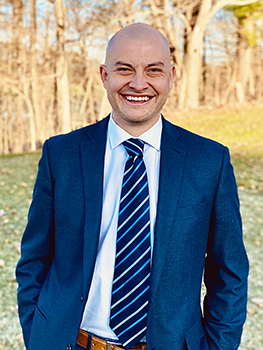 Pingry is pleased to announce that Edwin Núñez will be the School’s next Director of Enrollment Management, effective June 1, 2022. His appointment is the culmination of a nationwide search that began in December in cooperation with the executive search firm Spelman Johnson, as the School sought a forward-looking admissions leader.

“Edwin has a demonstrated track record of excellent leadership and innovation in admissions. He understands what it takes to build an effective team, dedicated to utilizing contemporary best practices. Edwin's skills and experience, coupled with his enthusiasm to help build a better Pingry, made him the ideal candidate for this critical senior leadership role,” said Head of School Matt Levinson.

Mr. Núñez comes to Pingry from Hebron Academy, an independent, coeducational day and boarding school for Grades 6–12 in Maine, where he has worked twice. Most recently, he served as Assistant Head of School for Enrollment Management, on pace for a historical high net tuition revenue while recruiting 260 students. Among other accomplishments, he has redesigned the school’s online presence with an emphasis on brand marketing and student recruitment, and he modified Hebron’s transportation program so the school could recruit students from new regions.

Previously at Hebron, Mr. Núñez was Director of Admissions and Financial Aid—achieving a record number of new students and revamping the admissions strategy—and Director of International Relations and Recruitment.

Prior to his recent work at Hebron, Mr. Núñez was Assistant Director of Admissions at Thornton Academy, and first worked at Hebron as Associate Director of International Admissions.

“I am thrilled to take on the role of Director of Enrollment Management at Pingry, and I look forward to building on the many successes that the Institutional Advancement and Admissions teams have already achieved,” Mr. Núñez said. “The Pingry community of faculty, students, parents, and alumni is inspiring. I believe this group can set the highest standard for independent education in the 21st century. As we do so, I’m excited to ensure that a Pingry School education is accessible to future cohorts of talented and diverse students. And above all, I am looking forward to representing the mission and the values of Pingry in every aspect of my position. Go Big Blue!”

Mr. Núñez received an International Baccalaureate Diploma from Li Po Chun United World College of Hong Kong, was a CET Academic Program Scholar (C.V. Starr-Middlebury Language School in China) at Zhejiang University of Technology, and double majored in Economics and Chinese Language and Literature at Middlebury College. He will be living with his wife Meaghan and son Luca on the Pottersville Campus.