Every year, seven Pingry seniors are chosen to represent the School as scholar athletes in Somerset County, the Skyland Conference, the New Jersey State Interscholastic Athletic Association (NJSIAA), and the New Jersey Independent Schools Athletic Association (NJISAA). Below are the seven Pingry seniors—equally committed in the classroom as they are in their sport—who met the criteria this year. 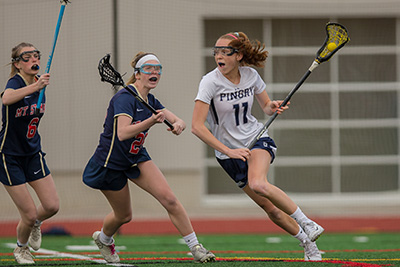 A four-year varsity letter winner in basketball and lacrosse, and a three-year varsity letter winner in soccer, Alyson served as captain of the Girls' Varsity Basketball Team her junior and senior years, and captain of the Girls' Varsity Lacrosse Team her senior year. She played starting goalkeeper for the Girls' Varsity Soccer Team, which won back-to-back State Championships in 2018 and 2019. In basketball, she was awarded First Team All-Skyland Conference honors in 2020. In lacrosse, Aly was named a US Lacrosse All-American and made First Team All-Skyland Conference and First Team All-Group 1 in 2019. With 213 goals, 69 assists, and 245 draw controls in her high school lacrosse career to date, she helped lead Big Blue to back-to-back State Sectional Championship titles in 2018 and 2019. She has been on Honor Roll every semester at Pingry, and will continue her education at the University of Pennsylvania in the fall, where she will also play for the women's lacrosse team.

"Aly is a once-in-a-generation three-sport athlete—talented, hard-working, humble, and a great teammate. The fact that she combines that with a strong academic record and an acceptance to the University of Pennsylvania make her exceptional. I am only sad that she didn't have the senior spring that she deserved. She was three goals away from breaking the all-time Pingry scoring record in lacrosse, set by Mary Pagano '17! She will make Pingry proud next year on and off the field at Penn."—Director of Athletics and Head Coach of the Girls' Varsity Lacrosse Team Carter Abbott 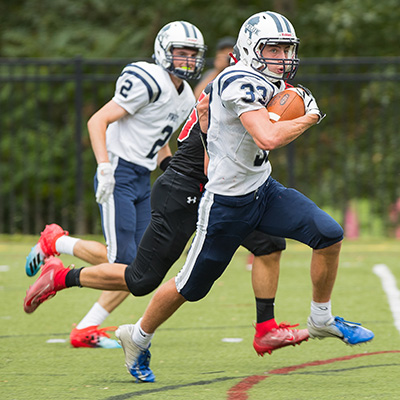 Sam Williams
A three-time varsity letter winner in football, two-time in basketball, and two-time in track, Sam captained all three Big Blue teams his senior year. In football, he was selected to the league's All-Offense First Team, and was a Jersey Sports Zone Play of the Week winner. Sam was on the Honor Roll all four years at Pingry, was named an A.P. Scholar, and received the Brown Book Award and the Citizenship Award as a senior. He will attend Dartmouth College in the fall.

"Sam is inexhaustible in class and in sports. I've often wondered when and how he sleeps and how he's able to attack each day with such a consistent, positive, and accountable demeanor, especially since I don't know how he can be so prepared each day and get a good night's sleep, too. As a teammate and a classmate, he's never asked others to do things for him and has always wondered what he can do for others, and what he offers is preparedness. He is immeasurably honest, and, as such, he expects straight answers, and if he's going to offer you his accountability, you have to respond with yours. You will never hear him complain, argue, or bemoan his fate, but he will tacitly challenge everyone around him, coaches and teammates and himself, to be as tireless as he is in this relentless pursuit of responsibility and accountability. It is said of great athletes that they are able to make their teammates better; Sam's presence demands that his teammates and coaches do the best they can. You know Sam's going to—it's as constant as the northern star. All coaches ask that their players leave everything on the field, and maybe better coaches have greater success with this, but few athletes truly understand the meaning of sacrifice to 'leave everything on the field'; Sam understands."—Head Coach of the Varsity Football Team Chris Shilts 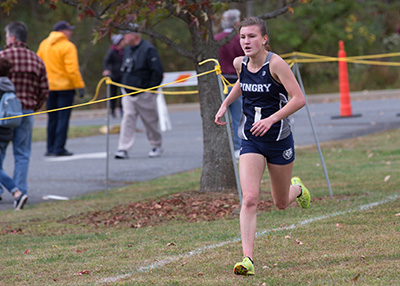 Nicole Vanasse
A 12-time varsity letter winner on the Girls' Varsity Cross Country, Indoor, and Outdoor Track & Field Teams, Nicole holds numerous school records, including the 4000 and 5000 meters in cross country; and in track, the 1600 and 3200 meters and 1- and 2-mile events (indoor) and 2-mile, 800 meters, and 1600 meters (outdoor). A two-year cross country and outdoor track & field captain, she is a three-time NJSIAA Non-Public A State Champion in cross country—the first-ever "three-peater" in the state championships. Her junior year she was the first Pingry female runner to qualify for and compete in the prestigious Footlocker Cross Country National Championships; she returned her senior year, finishing 27th in the nation. A National Merit Commended Student and Honor Roll student all semesters, she will run for Columbia University in the fall.

"Watching Nikki grow as an athlete has been an extraordinary experience. As coaches, we knew she would make an immediate impact on our programs because of her success as a Middle School runner. She exceeded all our expectations. She will leave Pingry holding records for cross-country, indoor track and outdoor track. She has competed at the national level in all three sports, and Colombia is getting the best girls' distance runner Pingry has ever had. Not only is she exceptionally talented, she is a leader and loved by her teammates and coaches."—Head Coach of the Girls' Varsity Cross Country Team Tim Grant 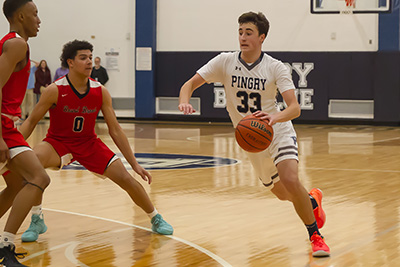 Raymond Fluet
A four-year letter winner for the Boys' Varsity Basketball Team, Raymond was captain his junior and senior years, and received First-Team All-Conference honors both years. Those same years, his coaches named him Offensive Player of the Year. Out with an injury his sophomore year, he returned his junior year to lead the team to a 15-5 season, which included a career-high, single-game score of 31 points. An Honor Roll member, he will attend the University of Southern California in the fall.

"Ray is someone who I consider a culture-builder. His selflessness, enthusiasm, and dedication to basketball make him not only a great teammate, but a joy to coach. He has an inclusive mindset and cares more about winning than his individual success. As his coach, I've appreciated Ray's willingness to compete on and off of the floor, exhibiting the best version of himself. He is well-liked by his peers and goes above and beyond to create a great experience for everyone."—Head Coach of the Boys' Varsity Basketball Team Jason Murdock 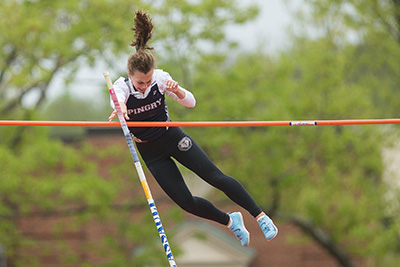 Caroline Dannenbaum
A 12-time varsity letter winner and on the Girls' Varsity Field Hockey (senior captain) and Indoor and Outdoor (senior captain) Track & Field Teams, Caroline has excelled at the pole vault since her freshman year. She was an NJSIAA Indoor Meet of Champions winner in the pole vault in 2019 and 2020, clearing 12'7" her senior year to break the meet record and earn Indoor Track & Field Athlete of the Year honors. A six-time national qualifier, in 2019, she finished eighth in New Balance Nationals Indoor. She is also a member of the 4x100 meter relay team that holds the school record. A First-Team All-Conference honoree in field hockey her senior year, she also holds the School's indoor (12'10"25) and outdoor (13') pole vault records. She has been a member of the Honor Roll each year and, next year, she will vault for Vanderbilt University.

"Caroline is the type of athlete every coach wants on their squad. A team player with a positive disposition, and a fierce competitor during the meet. After the competition, she is the first to thank the officials, then right to questioning: 'What could I have done differently to have performed better today?' When I started volunteer coaching at Pingry, the boy's pole vault record in the school's nearly 150-year history was 12 feet, and the girl's record was 8 feet. In Caroline's sophomore year, she vaulted 13 feet, which was the best jump in the entire country for any sophomore girl. Her accomplishments are amazing, including being a two-time Meet of Champions winner, and she was in great position to make that three if the spring season hadn't been cancelled. The thing that impresses me the most about her is how well she represents herself, her family, the school, and the sport. She is a true inspiration and I feel privileged and honored to have been her coach."—Pole Vault Coach Mark Cortazzo P '15, '16 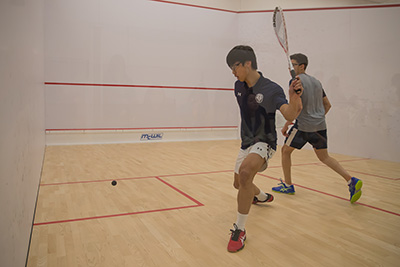 Collin Wen
Collin is a four-year varsity member and senior co-captain of Boys' Varsity Squash Team. Playing the second position in his junior year, he helped capture the 2019 High School Team Squash Division II Championship title, featuring the top teams across the nation. That same year, he was given the Most Valuable Player Award by the team. Collin was also the 2019 US Squash Silver National Boys Under-19 Champion. In the Under-17 Division, he earned a national ranking of 22nd. Outside of athletics, Collin is a National Merit Scholarship Finalist, AP Scholar, and active member of the Independent Research Team (iRT). Collin will be playing squash for the Massachusetts Institute of Technology next year, where he plans to study computer science.

"Collin has been an integral member of the Boys' Varsity Squash Team for four years. He worked his way to the top spot on our ladder for his senior year and served as team captain as well. Collin is dedicated to the program, and has consistently done everything that he can to not only improve his own game, but to help his teammates to improve theirs as well. The embodiment of sportsmanship and hard work, Collin will be sorely missed at Pingry next year, and I'm looking forward to seeing him continue to grow as part of the team at MIT."—Head Coach of the Boys' Varsity Squash Team Ramsay Vehslage 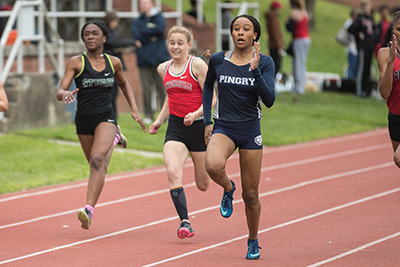 Lauren Taylor
A four-year letter winner on the Girls' Varsity Indoor Track & Field Team, and three-year letter winner on the outdoor team, Lauren holds school records in the 100 meters (12.79), 200 meters (25.99), and 55-meter (7.56) dash. A member of two relay teams that qualified for New Balance Outdoor Nationals last spring, she also took gold at the 2019 Skyland Conference Championships in the 100-meter dash. In 2018, she finished third in the NJISAA Indoor Track &  Field Championships in the 55-meter dash. Lauren, an Honor Roll student all semesters at Pingry, is an AP Scholar with Honors and a National Merit Commended Student. A member of Pingry's Independent Research Team (iRT), Humanities Independent Research Team (HIRT), co-head of the Writing Center, and co-editor-in-chief of Calliope, she won the School's Rensselaer Math and Science Award this year. She will attend Stanford University next year with plans to major in math and computer science.

"I have had the joy of having Lauren both as a student and an athlete. The NJSIAA scholar athlete award is very well deserved by her. She has excelled in the classroom and is a leader of our Independent Research Team group. She has distinguished herself as one of my best captains of all time. Her dedication and enthusiasm to track has helped take our sprint squad to new levels. Lauren will do great things in life and we will miss her dearly."—Head Coach of the Girls' Varsity Outdoor Track & Field Team Tim Grant