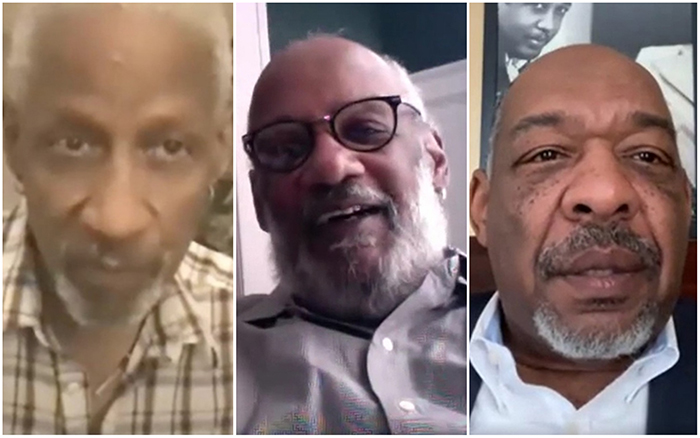 Past met present on a recent afternoon, as part of Black History Month, when students learned about Pingry's history from three of the School's first Black students (pictured above, from left): Dr. Robert Fullilove '62, Professor of Sociomedical Sciences and Associate Dean for Community and Minority Affairs at the Columbia University Irving Medical Center; The Honorable Harold Fullilove '63, a retired Superior Court Judge for the State of New Jersey; and Mark Fury '75, an attorney and former mayor of Plainfield, NJ.

Appearing on a recorded video, Dr. Robert Fullilove spoke about being one of the first African American students to integrate Pingry. "At a time when school desegregation was an important part of national politics, Pingry decided it couldn't afford—ethically, morally, or politically—to have a graduating class in 1961, its centennial year, that was all white," he said. Dr. Fullilove was elected to student government and was elected President of his senior class. Two years after graduating, he did voter registration work with the Student Nonviolent Coordinating Committee in Mississippi; he also interned in Dr. Martin Luther King, Jr.'s offices and learned about the factors "driving American history."

Following are excerpts from the other remarks, responding to questions about Pingry's impact; balancing emotions and home/school lives during the Civil Rights era; allyship; and their wish for Pingry.

"We lived in Newark. I had almost no interaction with people not of color, and that changed at Pingry. When I graduated, I was the only person of color in the School. I had no fears of going to a predominantly white institution [Lehigh University] or career and not being able to succeed."

"During the Civil Rights era, I lived in two different worlds. I don't recall ever visiting the home of one of my classmates, and none of them came to my house. I had friends in Newark and I met my wife of, now, 51 years—I did not socialize with Pingry. I had my other life, but while at Pingry, I never felt any overt or covert discrimination. I attribute a lot to my older brother who is outgoing and social. I was able to slide by."

"My wish is that there will be no need for Pingry to feel it's necessary for students of color and non-minority students to need a program like this [conversation]. The world will be where it should be."

"I served on Blue Key and gave many tours of the School—I found out what it means to love an institution that loves you. I never had a bad moment at Pingry."

"I came to Pingry in 5th grade and made as many friends as possible. I went to classmates' homes and some came to mine. It was a symbol of progress that, a decade later [than the Judge], I had it easier. It wasn't new . . . Today's students have it tougher than we did. You might not be in both worlds, so you have to reach even further in both directions."

"With great power comes great responsibility. Knowledge is power. For 45 years, I have taken great pleasure of sitting in the room with presidents, kings, senators, governors, congressmen, corporate executives, educators, policemen, judges . . . none is better prepared than I am to be in that room, and I have an absolute obligation to let them know I am prepared."

"No one has an obligation to bear my burden . . . It is your responsibility to recognize that you are a human being, that you are incredibly intelligent, talented, able, gifted, and determined, and that you might just happen to have Brown skin. Be authentic, and you will attract those who appreciate authenticity."

"All the years that I went to assembly at Pingry, I watched guys come up and get their Letter-in-Life [the Pingry Alumni Association's highest honor for a graduate]. I said, 'I want to be that guy one day, but I don't know that that will ever happen.' My wish is to have a moment like this, when people of color can get their Letter-in-Life. I feel like you all just gave me mine."