Following her third consecutive Non-Public A State Championship title last month, Nicole Vanasse '20 took third at the NJSIAA Meet of Champions, a major achievement in itself for any New Jersey runner. But her season didn't end there. She went on to place ninth at the Foot Locker Northeast Regional Championships in Van Cortlandt Park on November 30, which earned her entry—for the second year in the row—to the famed Foot Locker National Cross Country Championships, held Saturday in San Diego's Balboa Park. 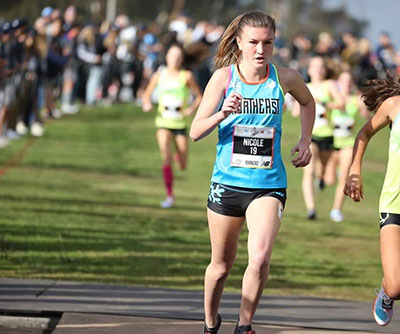 As the only New Jersey girl to qualify for the national event—not to mention the first Pingry girl—Nicole capped her stellar high school cross country career by placing 27th in a field of 40 of the nation's most elite runners. In one of the fastest races ever run on the course, she slashed her time from last year, finishing in 18:20 and earning an All-American Honorable Mention.

Her impressions from the prestigious running event: "My goal for the race was simply to improve on my placement and time from last year. I was very happy with my race, as I ran 34 seconds faster than last year. I also placed five spots better. It certainly helped that it was my second time at the event. Not only was I familiar with the course, but I was also familiar with the travel and meeting new people leading up to the race. Last year's race, I think, was a learning curve, as it was very overwhelming and exciting. However, this year, I was able to relax and have more confidence heading into the race. It was so special to be able to attend the Foot Locker National Cross Country Championships two years in a row, and I am so thankful for my coaches, teammates, and family members who supported me throughout the season. I had such an amazing time throughout the entire weekend, and I could not think of a better way to finish out my high school cross country career!"

Nicole will take her running talents to Columbia University next fall.