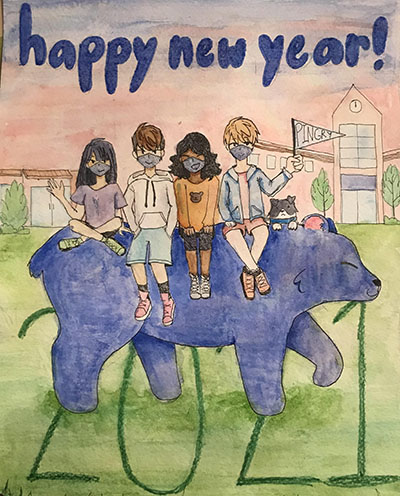 A record 35 submissions—featuring an array of creative student artwork—were received this fall for Pingry's sixth annual New Year's greeting card design contest! Selecting the winner was more challenging than ever for the panel of Pingry faculty and staff judges from both campuses. For this reason, similar to last year, a victor and a runner-up were selected.

Sheryl Chen '26, who earned top honors last year, was selected the winner again this year for her signature whimsical touch: A jolly Big Blue carrying mask-wearing students into 2021 (pictured right). As the Form I student explains, her approach "represents how the community is all staying strong and getting through it together." Using primarily watercolors, with markers and pens for the lettering and details, she reports that her overall design was more planned out and better executed than her winning artwork last year. And, of course, in what has become her trademark flourish, she couldn't resist including Finn—the school dog—once again.

Honorable Mention went to Grade 2 student Yunqi Zhang '31, a budding artist who comes by his talent naturally. According to his parents, Yunqi's great-grandfather, Songyan Liu, is a renowned Chinese traditional-style painter and calligrapher, whose paintings were displayed in both the National Art Museum of China as well as the China State Guest House. Yunqi's grandmother, Dailin Liu, also a painter and an art educator in China, is the chief editor of a series of high school textbooks on art. "You can imagine how happy she was when she heard Yunqi's good news," reported Yunqi's mother, Dr. Chenxuan. Yunqi, who loves to play in the snow with his older sister, used watercolors for his wintery design (pictured below). 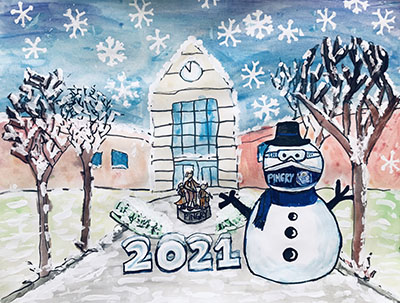 Sheryl and Yunqi's festive artwork adorn Pingry's New Year's card, which was delivered to nearly 3,000 mailboxes, just in time to ring in 2021! We wish the entire Pingry community a very happy and healthy New Year!