The Pingry School
New Members of Pingry's Board of Trustees
gwaxberg
Jul 17 2017 9:31 AM 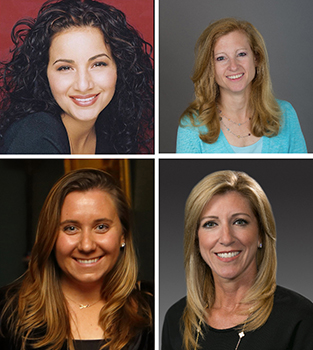 Anthe Angelides is President of the Pingry School Parents' Association (PSPA) for the 2017-18 school year, after serving on the Executive Board for the past two years. She is Executive Operations Manager at Top One Road Markings Corp. Originally from Toronto, Canada, Mrs. Angelides attended York University, where she majored in Child Psychology and minored in Philosophy. She and her husband James have three children: Yanni, a 2016 Pingry graduate; Georgie; and Stamati, a current Pingry student.

Stephanie A. Link, who has 25 years of investment experience, is Global Asset Management Managing Director and Equities Portfolio Manager for TIAA Investments, managing large-cap equities. Previously, Mrs. Link was Chief Investment Officer for TheStreet.com and was Co-Portfolio Manager of and Director of Research for Action Alerts PLUS, Jim Cramer's Charitable Trust—she was responsible for all premium content at TheStreet.com and the daily management of the charitable trust. Mrs. Link has also been Managing Director of Institutional Sales and Director of Research for Prudential Equity Group. In addition, she appears regularly on CNBC as a contributor. Mrs. Link earned a B.S. in Finance at Boston College. She and her husband James are the parents of Georgia, a current Pingry student.

Maggie O'Toole '05 is a set designer and producer for print, film, television, events, and web content in New York City. She has worked with top designers such as Mary Howard, Tom Lenz, and John Yeck, and with top photographers and directors such as Annie Leibovitz, Steven Meisel, and Sebastien Mader, for clients that include MTV, CBS, AOL, Vogue, Vanity Fair, Prada, and Louis Vuitton. Ms. O'Toole received a B.A. in Art History and a certificate in Painting from Princeton University. While at Princeton, she played on the Women's Varsity Squash Team, which won three consecutive national championships and two Ivy League titles, and she served as a captain her senior year. She later received an A.A.S. (Associate in Applied Science) in Interior Design from Parsons The New School for Design. Ms. O'Toole is a board member for the Pingry Alumni Association, President of Pingry's Second Century Leadership Society, and a mentor for CitySquash, a not-for-profit after-school enrichment program based at Fordham University and Poly Prep Country Day School.

Laura Overdeck is Founder of Bedtime Math, a non-profit that aims to help children love math. Over a quarter-million people have downloaded her app of playful, nightly math problems, and more than 90,000 children have enjoyed Bedtime Math's after-school Crazy 8s Club. Mrs. Overdeck is also Chair of the Overdeck Family Foundation, Vice Chair of the Board of Liberty Science Center, and a trustee at Princeton University. In addition, she serves on the advisory boards of Khan Academy, Johns Hopkins Center for Talented Youth, and Science Friday. Mrs. Overdeck received a B.A. in Astrophysics from Princeton University and an M.B.A. from the University of Pennsylvania's Wharton School of Business. She and her husband John have three children, all of whom attend Pingry.