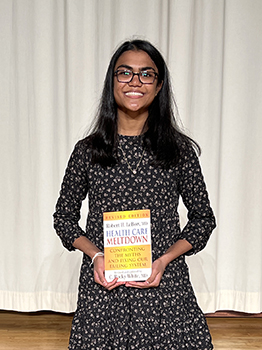 One of the most eagerly awaited assemblies of the year is Pingry's annual Dr. Robert H. LeBow '58 Memorial Oratorical Competition, when six Upper School students—sophomores and juniors—speak for four-and-a-half to six-and-a-half minutes on a topic of their choosing. This year, the audience listened to speeches by six juniors: Rachel Zhang '23, James Beacham '23, Caleb Park '23, Milenka Men '23, Shaan Lehal '23, and Mirika Jambudi '23.

Upper School Latin Teacher Judy Lebowitz organized the competition; the faculty and student judges named Mirika the winner ("Your One True Purpose Might Not Exist, and That's Okay") and James the runner-up ("Our Time is Ticking Closer').

The competition was funded in 2005 through the generosity of the Class of 1958, led by the late William Hetfield, in memory of their classmate. Dr. LeBow was an accomplished public speaker, addressing audiences worldwide about the need for health care reform. While working for the U.S. Agency for International Development, Dr. LeBow and his wife Gail lived in numerous developing countries and provided medical services to underserved populations. Dr. LeBow is the author of Health Care Meltdown: Confronting the Myths and Fixing Our Failing System, a book drawn from his public speaking engagements.

Dr. LeBow's classmate Dr. James G. Smith '58 described Dr. LeBow as "a hard-working student, but never a bragger. He was there as a real person, doing what he did to the best of his abilities." Dr. LeBow would spend his life giving to others—specifically, giving to others most in need. Dr. Smith also read the introduction to Dickens' A Tale of Two Cities (he recently re-read his copy of the book that he received in Ed Cissel's eighth-grade class) "because of the extremely difficult times right now. In Dickens' words, we see reasons for despair and happiness, but reasons for hope. Bob gave a message for hope because he cared—even in the face of incredible darkness."

Rachel Zhang '23 ("Life Imitates Art") described her gleeful feeling when she discovered that artwork she submitted to a competition—artwork that was completely hers, not touched by art experts at an intensive art experience—was listed among the winners. "I always lacked confidence in my work," she said, "but I achieved my childhood dream with my own work." Her advice: achieve your full potential on your own terms.

James Beacham '23 ("Our Time is Ticking Closer") spoke about how the app TikTok does not discriminate and "presents something almost poetic: everyday people achieving their dreams. It acts as a reminder that some people are not treated equally in society, like my mother . . . We must continue to make Pingry as inclusive as possible. As Pingry students, we are held to a higher standard."


Caleb Park '23 ("This Is Your Brain on Arrogance"), a cellist, said that panic, self-doubt, and nervous energy set in while he was waiting to be let into an audition room. "I don't like who I am when I'm arrogant—putting myself up while putting others down." He said arrogance stems from a lack of self-esteem and that "we mimic confidence to hide our inner flaws." After bragging about his cello playing to other players, Caleb "bombed the audition." Confidence, he said, comes from a dedication to self-improvement . . . his happy ending was that he returned to the audition the following year and performed well.


Milenka Men '23 ("Why I Mourn the Make-Believe") spoke about an epidemic of grief in the world, and yet people willingly watch sad media and would "rather cry over a character than real life." Then, people are apt to say, "Things could be worse," which "does more harm than good. People already know that and could be teetering on the edge of 'worse.' Why do we say it? To circumvent bad feelings and go to positive ones. False fulfillment with a character keeps us going back."


Shaan Lehal '23 ("Take One for the Team"), recalling that he had a hard time sharing an opinion in English class when he had the opportunity, said, "It is surprisingly difficult to share opinions in our society. Why? It goes back to herd mentality. We want to remain part of the herd. At Pingry, people avoid sharing their opinions for fear of being cancelled." He urged the audience to "take one for the team and contribute to the discussion. Those who make a difference stand out because of their courage in speaking out."


Mirika Jambudi '23 ("Your One True Purpose Might Not Exist, and That's Okay") took issue with the concept of "passion" (as in, "pursue your passion") because she said "passion" is not fixed—people grow and their interests change. She also took issue with the concept of a "career" as the only thing that can fulfill a passion. "Turning passion into profit—if you write, publish. If you're an artist, sell . . . Where's the passion in that? Awards, subscribers, money . . . we do things with the expectation of results. Interest in a job is important, but it doesn't have to be your reason for existing on earth."