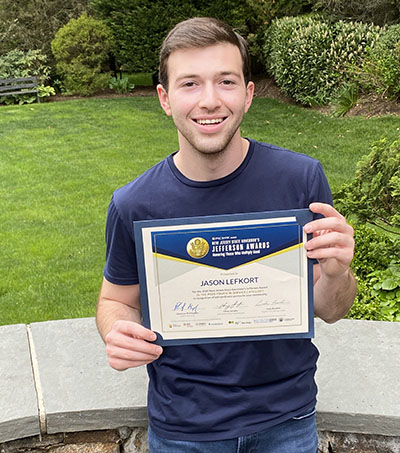 Senior Jason Lefkort was recently honored with the 2020 New Jersey State Governor's Jefferson Award in the Service to Youth category. According to The Governor's Office of Volunteerism, which administers the award, honorees "achieve measurable community impact and represent outstanding acts of public service, without the expectation of recognition or compensation. Recipients demonstrate unique vision, dedication and tenacity of heroic proportion and serve as inspiration for others." The 2020 ceremony, originally slated for this past summer, was delayed due to the pandemic, and was held virtually in late February.

In addition to volunteering for a number of years at Street Squash Newark, for the past five years Jason has volunteered in various capacities with Family Connections, a New Jersey not-for-profit that supports children, adults, and families.

As an outgrowth of teaching financial literacy at Family Connections, he saw the need to create a more comprehensive learning experience. As a result, last year Jason developed and taught the Think Dollars & Sense Program, bringing financial literacy to underserved students. To increase the impact of TD&S, he licensed the program to other students around the nation, who are delivering it to underserved students in their area.

"I am honored to receive the award, but the true honorees are the TD&S students, who put in the time and effort to acquire the knowledge that empowers them to succeed," Jason said.

President of the Pingry Credit Union, whose launch he led this past school year, he was also named a Presidential Scholar Candidate. Jason is headed to the Wharton School of the University of Pennsylvania in the fall, where he plans to study economics.

Hear more from Jason about his Think Dollars & Sense Program