Skip To Main Content
Jackson Artis '16 Honored by Princeton University
gwaxberg
May 13 2020 9:36 AM 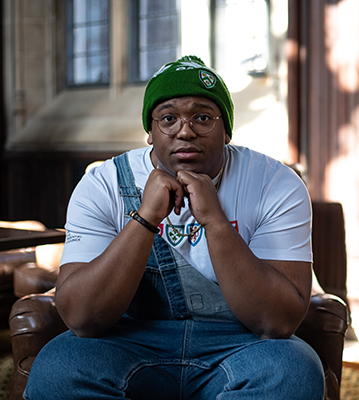 Princeton University honored Pingry alumnus Jackson Artis '16 with the 2020 Spirit of Princeton Award, which honors undergraduates who have made significant contributions to campus life. The award recognizes those who have demonstrated a strong commitment to the undergraduate experience through dedicated efforts in student organizations, athletics, community service, religious life, residential life, and the arts.

"I'm really humbled to have been in this group of amazing people," Jackson says. "Every one of them is someone I look up to and am in awe of. I'm blessed to be able to receive this reward—it's really just a result of the love and support that I've received from my family. This is theirs just as much as it's mine."

Among his accomplishments, Jackson was a member of Fuzzy Dice Improv comedy and will serve as the Fuzzy Dice Alumni Board Director upon graduation; spent his senior year as Co-Host of All-Nighter, Princeton's first late night comedy talk show; and was a member of several Theatre Department thesis productions, the Princeton Christian Fellowship and Cannon Dial Elm Club, and the Princeton Powerlifting team, competing four times and qualifying for collegiate nationals three times.

Jackson began his independent music career his sophomore year, releasing three albums and two EPs (extended-playing records) and becoming one of the original members of the Meal Plan Collective. He worked as a studio manager for the Ultraviolet Studio on campus. Jackson spent his last two years as a Residential College Adviser (RCA) in Princeton's Rockefeller College, of which he is now a member.

Jackson majored in Mechanical and Aerospace Engineering, with certificates in Chinese Language Studies as well as Robotics and Intelligent Systems.