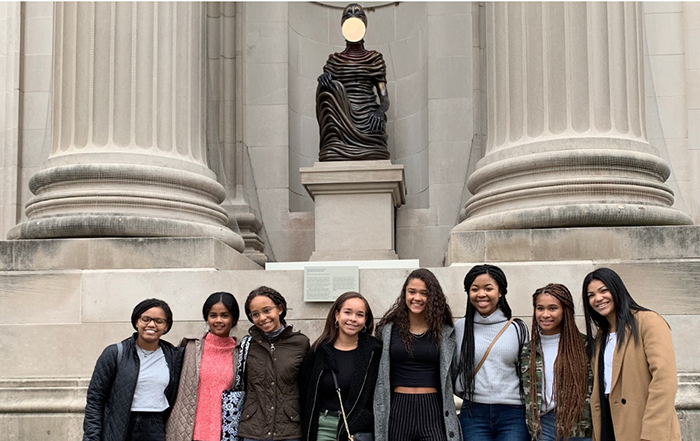 Ytasha Womack, award-winning author, filmmaker, and expert on Afrofuturism, defines Afrofuturism as "an intersection of imagination, technology, the future, and liberation" as seen from a black cultural viewpoint. The Afrofuturism Humanities Independent Research Team (HIRT) meets weekly to preview and discuss Afrofuturistic art (Kehinde Wiley portraits and Wangechi Mutu collages, for example), texts (Wild Seed by Octavia Butler), and music (by Sun Ra, Janelle Monaë, and Missy Elliot, among others). The HIRT students are currently producing a podcast on how Afrofuturism applies to Pingry students and developing a blog to recommend works of Afrofuturism to peers. A research trip to Manhattan on November 5, 2019, left students with many thoughts and feelings about Wangechi Mutu's new façade installation at The Metropolitan Museum of Art, called "The NewOnes, will free us," as well as the exhibit Utopian Imagination at the Ford Foundation Center for Social Justice.

The four Mutu sculptures are the first artworks ever to inhabit four nooks in the Met's façade even though the nooks were included in the design of the building, constructed in 1870, for the express purpose of exhibiting art. Caryatids are sculptures that double as pillars holding up structural elements of a building. As caryatids, Mutu's four women echo the sculptures that are built right into the Met's exterior stone work. While Mutu's sculptures don't hold up parts of the building, the circular planes over the sculptures' mouths, foreheads, eyes, and crowns ask viewers to question what these women are holding up and why.

The Utopian Imagination exhibit was not designed to be expressly Afrofuturistic, but because the curation centered on the radical changes humans need to make in our imaginations in order to survive and thrive in the 21st century and beyond, the exhibit included vivid celebrations of underrepresented cultures thriving in the future, which included many Afrocentric motifs. Among the images exhibited were Mosques floating in space, transgender superheroes, and a plane flown seemingly by the power of a black boy's imagination.

One of the key themes I took away from the trip is the intersection between our own internal reflections and more outward interpretations or criticisms of society. While many of the art pieces exposed hidden and forgotten realities of systematically marginalized groups, other art pieces directly applied to the observer, forcing them to self-reflect.

One of the pieces in the Utopian Imagination exhibit that still resonates with me is Mikael Owunna's Sam. In this piece, Owunna uses UV light photography to visualize the UV rays the naked human eye cannot see. Owunna is using art as an outlet to display what cannot be seen, which I think is a central aspect of Afrofuturism: giving recognition and voices to the "unseen" and ignored. Many, if not all, of these pieces highlight a variety of voices and perspectives that have been systemically shushed by society.

Seeing "The NewOnes, will free us" in person allowed me to fully appreciate the choices Mutu made in this exhibit. Mutu discusses the influence of caryatids in creating this piece, and as I compared the caryatids carrying the weight of the building to Mutu's draped coils, they make the viewer literally feel the weight of these sculptures.

The exhibit itself was a genuine depiction of women today because it allowed the weight and the burden of history to be seen in the draped coils, but also the empowerment and beauty of the progress we have made now to be seen in a shoulders-back, almost royal posture. The duality of the past and the future in these sculptures embodies the spirit of Afrofuturism as we not only acknowledge the truth of an oppressive history but the hope of what the future can be.

The Utopian Imagination exhibit evoked many themes of the past while still remaining futuristic in essence. Almost all of the artwork within the gallery seemed to be commentaries on present or past social justice issues while still using the hopefulness of an unwritten and unoppressive future as the setting for the various multimedia artworks. This has been the particular definition of Afrofuturism that has resonated with me the most. From the birth of this nation to present times, the Black community has been continuously oppressed. This is why Afrofuturism as a topic is so important, but also inclusive. Since the past cannot be changed, the future is an extremely exciting and empowering prospect for not just the Black community, but all marginalized groups, in general.

One of the pieces that stuck with me was a photograph of an African American woman in an orange prison jumpsuit. However, her handcuffs are unlocked and she is wearing an astronaut's helmet. With mass incarceration being an enormous issue within the Black community, particularly in America, the photo is clear in breaking the stereotypes with a woman, uncuffed looking toward space and inferably, the future. 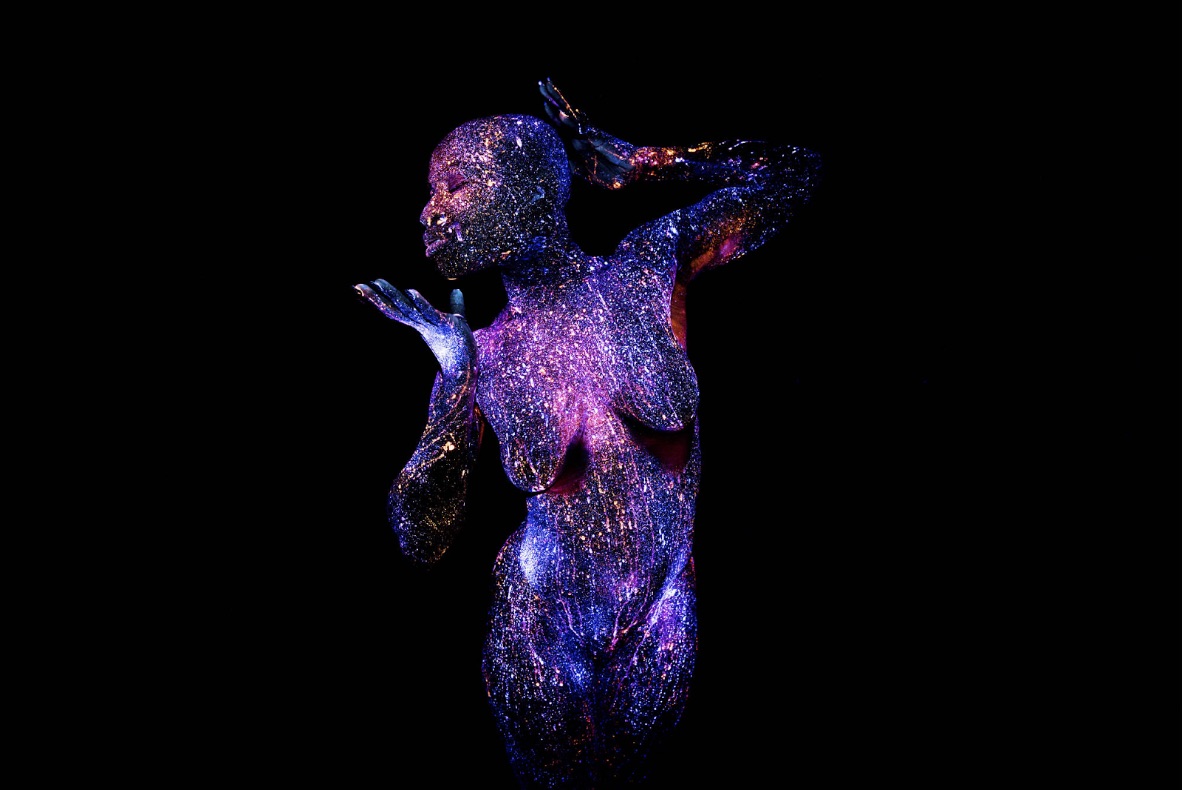 The Utopian Imagination show not only exhibited works that portrayed African Americans as powerful images, but it incorporated religions and other minority groups that have been discriminated against in the past and placed them in these futuristic and powerful settings as if to say "here we are, not only present, but thriving and saving the world." Afrofuturism has personally encouraged me to embody this mindset that I, as a young black woman, have the ability to transform anything within my reach and even beyond.

Noelle Mullins '20
The most striking part of the Utopian Imagination show was that it didn't have Afrofuturism in its name. Many of the artist's imaginations of what would be a beautiful and futuristic world was a future in which African Americans are portrayed in such powerful images. A Utopian future would be one in which black people and all of their intersections are equal and presented in the genre of science fiction with a very realistic lens. It definitely tied in with Seed to Harvest, a book that we read last school year that takes place in a very futuristic African utopia in which incredibly prosperous black communities are portrayed. 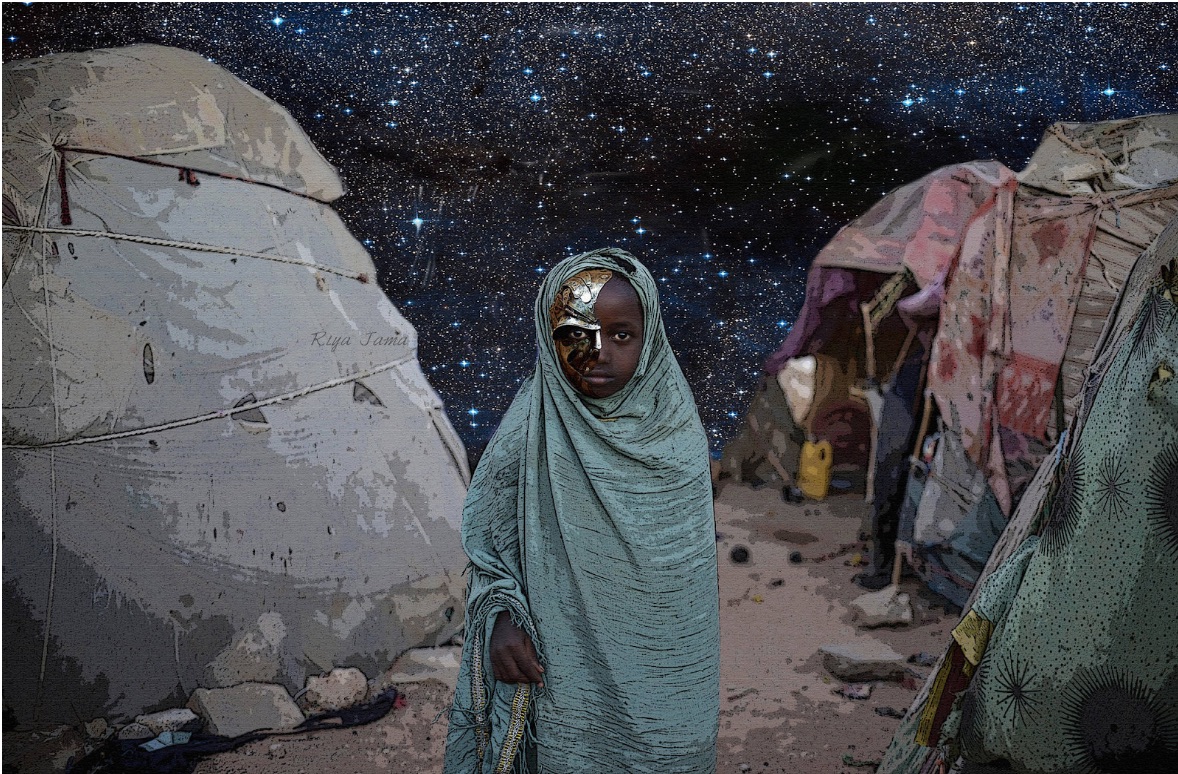 Before the Afrofuturism group was introduced to our school, I had no idea what Afrofuturism meant or what it stood for, but even just the title was enough to draw me in. Fast forward about a year-and-a-half and things are drastically different. Throughout that time, I have learned many definitions and interpretations helping me to recognize how Afrofuturism affects me daily and understand the impact that it could most definitely have on others. To me, Afrofuturism inspires hope and pushes people to be unapologetic about doing what they have to in order to get to where they want to be in life. Having all of this knowledge was extremely beneficial when our group went to the Utopian Imagination exhibit, allowing each of us to view the art with a deeper understanding. One of the art pieces that really drew me in was Android Girl by Farxiyo Jaamac. It depicts a black Muslim girl standing in a camp for internally displaced persons. What really drew me in was the apparent idea of this girl being in outer space, at which point anything could be possible for her. I think this image shows the intersection of our present and what could possibly become the future. 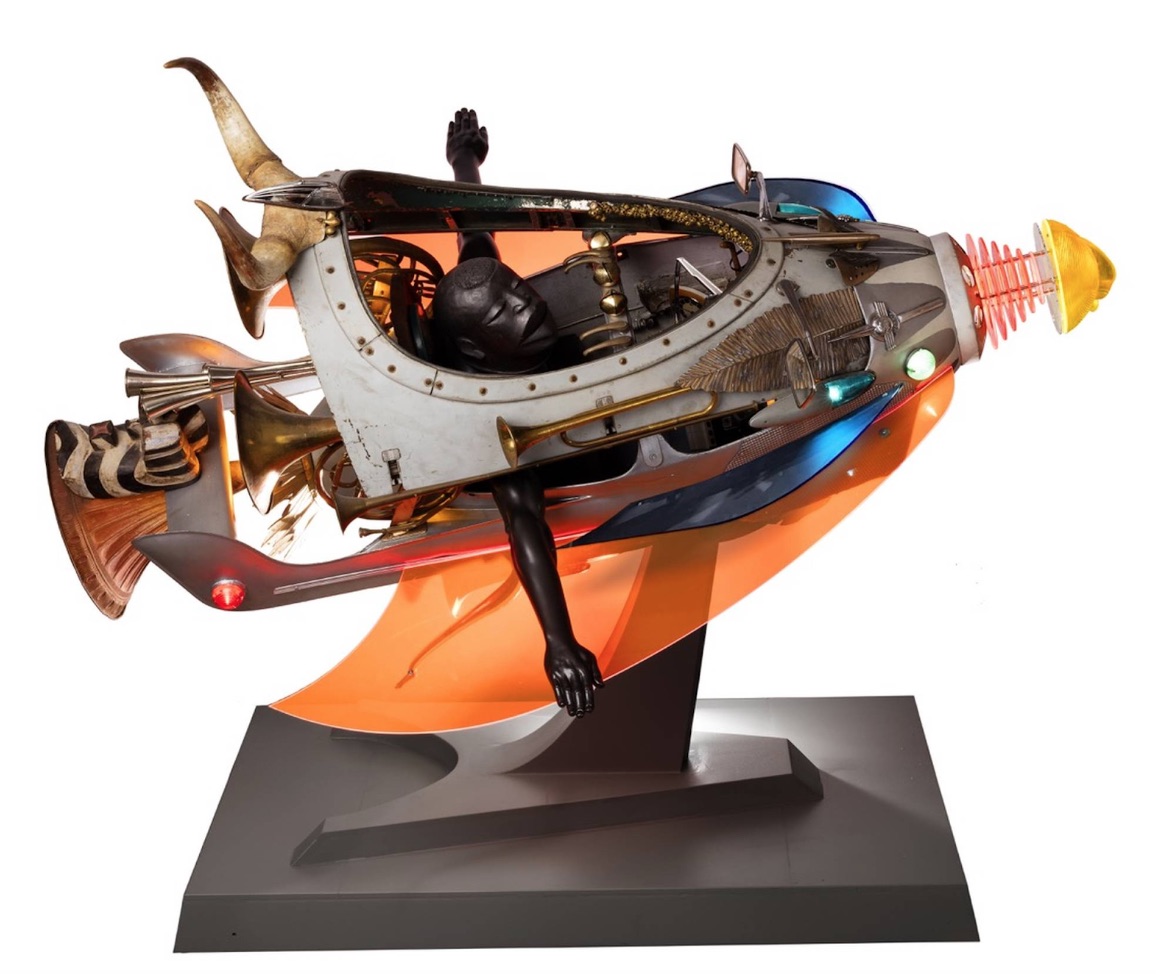 Our visit to the Utopian Imagination exhibit at the Ford Foundation Center for Social Justice was incredible because it depicted so many perspectives of the future of humanity and the possibilities for many marginalized groups. There were pieces that featured queer people of color, Muslim women of color, Asian women, indigenous peoples—the list goes on and on. Although we initially visited for the purpose of viewing Afrofuturist art, I was surprised because the exhibit displayed so much more. It truly was a unique intersectional experience.

One piece that made a great impact on me was Zak Ové's Sky Lark. At first, the piece itself appears to be a small spaceship with the bust of an African figure situated inside, but the more time you spend studying the ship, you begin to notice the intricacies and allusions to African culture. However, the most outstanding part about Sky Lark was Ové's decision to have the figure's arms outspread like the wings of the ship. This, to me, embodies Afrofuturism because it is about using our past to navigate our future. The figure in the ship is surrounded by important cultural mementos that build the means for his exploration into some other world, yet he is the one who has the power to steer his ship and control his destiny in whichever way he sees fit.

Being part of the Afrofuturism HIRT has been such a wonderful experience because it has opened my eyes to possibilities like the ones portrayed in Utopian Imagination and challenged me to question what our utopia would look like and how we can get there.