Justin's is the first in a series of essays—one for each fall athletic team—in which student athletes reflect on their altered season, and how they are making the best of safe practice and competition during COVID-19. 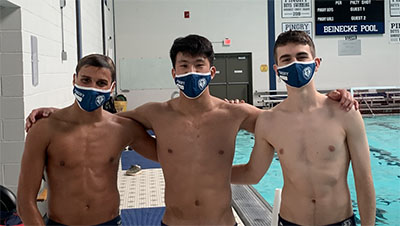 On August 26, Ms. Abbott, Director of Athletics and Community Wellness, announced that we would be the only fall sports team whose competitive season had been entirely cancelled due to safety concerns. At first, Noah Bergam '21 and I, captains of the Boys' Varsity Water Polo Team, were doubtful there would be a season at all. Was there a point in practicing if there weren't other teams to play against? Would the freshmen, many of whom had never seen or played water polo before, still be interested in the sport if there wasn't any competition?

Over the past two weeks, the unhindered enthusiasm of our 20 players, the largest team we've had in the last four years, has made it clear that practices are worth having. However, to do so safely, we've had to make adjustments at almost every step.

To begin, we've had to limit the time we spend in the pool, having practice in the water only on Mondays, Wednesdays, and Fridays, and strength and conditioning training on Tuesdays and Thursdays. Coach Joujan, Coach Jenkins, and I have also had to rework all of our drills to make them socially distant—our practices now consist of zig-zagged shooting lines, having players climb out at either side of the pool to avoid crowds at the wall, and as much rotation as possible. Unfortunately, this means full-on defense hasn't really been possible, so we've shifted our focus this year to building fundamental skills and knowledge in preparation for next year (or a potential spring season). To make up for our lack of real-game scenarios, Noah and I have started a weekly water polo series in which we send strategy videos and tips to the rest of the team.

While our season has been far from ideal, seeing the other Pingry teams start their scrimmages against other schools has made me realize how much I miss competing, and I now know for sure that I'll continue playing club water polo in college. This is definitely not the senior season we've been looking forward to. Nonetheless, I am glad to be back in the pool with my teammates, playing the sport we love.