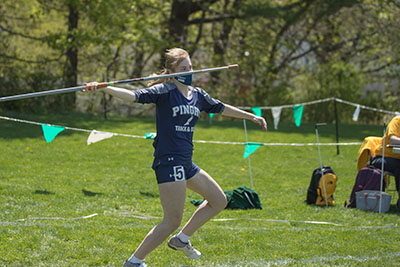 The 2020 season ended just as abruptly as it had started—there was one practice before Spring Break, the threat of a novel virus looming, before the world as we knew it crumpled and I was left only with uncertainty for what the future held. Like many people, I was instantly flooded with questions when the state shut down. How long would this last? Would we be able to have at least part of the spring track season I had been so looking forward to? Would my dreams of being a Division I javelin recruit disappear? All of these questions and emotions ended up in a frantic email to Coach Grant last March, neither of us having the answers to what could lay ahead.

There was a fear I carried with me into 2021's first practice, a part of me worried that this year would end up like the last. Stepping into the throwing circle for the first time seemed precarious, a word I never thought I would associate with something such as shot put. As I write this article, four weeks later, I feel an immeasurable amount of gratitude for every practice we're able to have where I can step into the circle. I finally feel back at home; albeit, I've had to adjust.

One word I've been forced to be comfortable with is "adapt." I think this has been the absolute hardest thing for me to do. I've had to massively alter the expectations I have for myself, especially in a season where I feel that I should be performing twice as well as I did during my freshman season. This is not the reality right now, as I've missed a full season worth of experience and coaching. But what is reality is that I am working twice as hard to get back in shape, twice as hard to perfect my javelin form, and cheering twice as hard for my teammates, most of whom are in their inaugural spring track season.

I've reprioritized my aspirations, something, though not easy, that has been far from detrimental for me. I'm on the track team because I recognize the value of being on a team–on this team. It's not about recognition, scholarships, recruitment; it's about being a part of a team that I had such a hard time living without.

Our team, together, has had to work much harder and be exponentially more flexible than in years past, rising to the challenges that this pandemic (especially the act of contact tracing) have presented to us. But, our team has adapted to these obstacles with utmost enthusiasm and grace. The team spirit and community that Pingry has was not something that was lost during the pandemic. In fact, our community has only grown stronger, reminding me of why I so immensely enjoy being a part of this team.