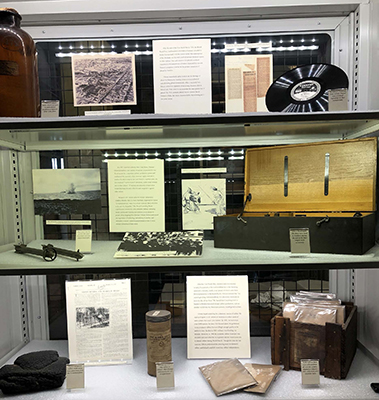 I completed a long-term project at Thomas Edison National Historical Park in West Orange, NJ to research, design, and build an exhibit for public display. My exhibit covers a topic not previously addressed in detail at the park: the efforts of Thomas Edison to support the U.S. war effort in and around World War I, including efforts to develop domestic sources of rubber and phenol as well as leading the Naval Consulting Board, which developed important war technologies including antisubmarine listening devices, depth charges, and airplane bomb sights.

To explain further, I am especially intrigued by the story of how technology affects society and influences history; I have been independently fascinated by both history and technology for a long time. Even in the past decade or so, when I have been old and observant enough to notice it, I have witnessed major changes to our society—on the scale of mere years—with the new pervasiveness of the Internet, mobile phones, social media, e-commerce, and more. Technology is one of the few things that has the power to radically change lives in comparatively tiny periods of time, and understanding how that works in society is critical, and a worthy topic of study.

My project went through several phases, including determining a topic, researching the topic, providing leadership to high school volunteers—Pingry friends—I recruited to design and write the exhibit (people who I knew could understand what I was trying to communicate, were capable writers, and were responsible enough to handle century-old artifacts), and assembling the exhibit. I started out by creating a list of topics. Of these topics, I initially chose Edison's research on rubber because I thought the museum could benefit from an examination of a lesser-known aspect of Edison's work. While reading books and historical articles on his rubber research, I found that he was involved in numerous other activities that were related to military preparedness. Edison was a reliable advocate for industrial preparedness for military conflict, and he recognized the necessity of developing domestic sources of key strategic materials.

Because of this work, I decided to broaden my exhibit to cover Edison's broader contributions to military preparedness. I was granted special access to the park's private archives to conduct research and identify artifacts for display. I identified and reviewed numerous secondary sources. Volunteers assisted in drafting text about the artifacts and constructing the exhibit. At the end of the project, I designed and implemented an entire display case full of artifacts, information, and stories to communicate my chosen theme, and presented my findings to friends, family, and the public.

I extend my thanks to Museum Technician/Special Use Permit Coordinator Holly Marino, an invaluable advisor and guide to the world of curatorial work. This project could not have happened without her help. The exhibit is on display indefinitely, and I plan to continue to volunteer there this summer as a tour guide.

Thomas received a Letter of Commendation from New Jersey Governor Phil Murphy, who writes, in part, "It makes me proud to learn of the many achievements of New Jersey students who use their knowledge, skills, and talents to help educate others. Your in-depth exhibit . . . is to be applauded. The scope of your project is a fantastic illustration of the many diverse facets of Edison's ingenuity and resilience . . . Thank you for helping to expand public awareness and understanding of Thomas Edison's industrial influence and unique role in history."

For his efforts, Thomas was also honored by a joint legislative resolution from the Senate and General Assembly, and a proclamation from The Board of Chosen Freeholders of Essex County.