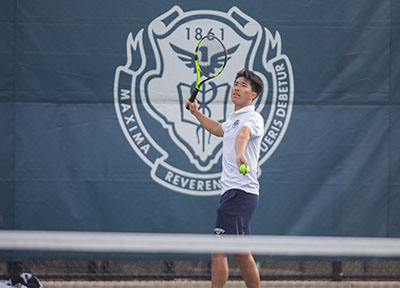 While COVID-19 has caused constant setbacks for the tennis season, the pandemic has not disrupted the fact that Pingry has one of its most promising tennis teams of all time this year.

Currently ranked third in the state and undefeated in our first two weeks of matches, our team has been dominant from first singles to second doubles, with no player having lost a match yet. Walker Johnson '21 and I are co-captains this season, and besides junior Sam Henriques, the rest of the team are all newcomers. Four are sophomores, who, despite being deprived of a season last year due to COVID, have improved greatly in the past year and have started out the season with a bang. Our two freshmen varsity members—Miles Kelly and Nate Blum—have also proved to be great on the doubles court and are poised to have a great season. Since most members train during the offseason at the same tennis clubs, building team chemistry has also been natural. Weekly Zoom meetings in lieu of practices during last year's cancelled season definitely helped as well.

But our success and high expectations are not only attributed to the stronger team we have this year. The way in which we've been able to adapt to COVID, both physically and emotionally, has only given us more drive and put us ahead of other teams. Even though tennis is a sport with relatively less threat of disease transmission, we've still had to take many precautions.

For example, although our season started later, we had a great few weeks of tennis preseason outdoors. We've also had to adapt to new protocols like wearing our sensors during practice and frequently hand-sanitizing. All members of the team have taken on these responsibilities without a problem, and in many ways, these responsibilities have also pushed us to compete harder in matches, as there is always the possibility that COVID shuts down or shortens our season. We are all eager to compete, and the changes wrought by COVID have only strengthened our bonds with each other and our excitement for the season.

Two years ago, we won the NJSIAA Non-Public B sectional championship but fell short in winning Preps and Counties. This year, our goals are to defend our sectional title and win both Preps and Counties, as well as redeem ourselves against #1-ranked Newark Academy. With our energetic and hungry team, I know these goals are more than reachable.

Last year, we were all devastated when COVID shut down spring sports. This year, we are making every second count and adding a new chapter to the legacy of Pingry tennis.