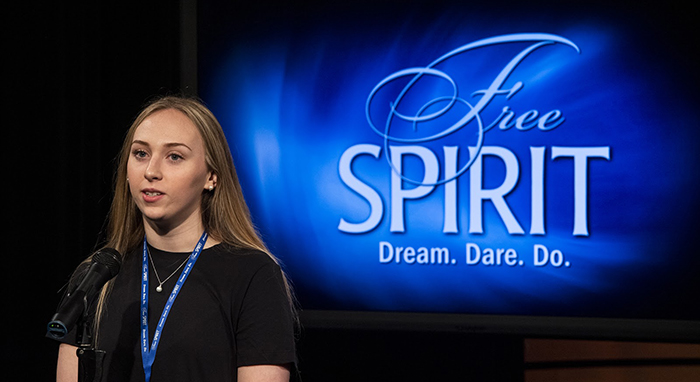 My Experience at the Al Neuharth Free Spirit and Journalism Conference

The Freedom Forum Institute reported that less than 1% of Americans can name all five freedoms of the First Amendment—speech, religion, press, assembly, and petition—in a study from 2018.

My eyes widened. My jaw dropped. I was appalled, to say the least. We were told this statistic on the first night of a conference that would change how I value the First Amendment.

This past June, I was chosen to represent the state of New Jersey at the Al Neuharth Free Spirit and Journalism Conference in Washington, D.C. I attended the one-week, all-expenses-paid conference along with 50 other representatives from their respective states (including Washington, D.C.).

Al Neuharth was an American journalist, author, pioneer, free spirit, and champion of the First Amendment. He founded USA Today, the Freedom Forum Institute and its Newseum, and the Free Spirit and Journalism Conference.

Although Mr. Neuharth passed away in 2013, his legacy of "Dream, dare, do." still lives on, thanks to the contributions of his daughter, Jan Neuharth, and her children, AJ Neuharth-Keusch and Dani Neuharth-Keusch. Jan, AJ and Dani honor Al's individualist qualities through the Free Spirit and Journalism Conference and continue to spread awareness about the First Amendment.

We spent the majority of our time inside the Newseum. Because I am an avid viewer of political satire shows, my favorite exhibit was "Seriously Funny: From the Desk of 'The Daily Show with Jon Stewart'". Other fascinating exhibits included the Berlin Wall Gallery, the Journalists Memorial, and a wall of hundreds of front pages from newspapers around the world on the day the 9/11 attacks occurred.

Many of the lectures, workshops, and Q&As were held in the Newseum as well. From Courtney Radsch, Advocacy Director at the Committee to Protect Journalists, I learned about the dangers attributed to being a professional journalist. I had the chance to listen to David Fahrenthold, a Pulitzer Prize-winning journalist who is known for his acclaimed coverage of the Trump family's business interests. Pulitzer Prize-winning photojournalists Carol Guzy and J. Scott Applewhite shared their experiences that range from capturing crises in Haiti to working with the past five presidents. I conversed with Free Spirit alumni, who work for national publications such as The Washington Post and The New York Times, about their success and advice for entering the professional field of journalism.

The discussion with Freedom Riders Joan Trumpauer Mulholland and Ernest "Rip" Patton distinguished itself among the other activities, however. The Freedom Riders were groups of civil rights activists who rode buses through the South to protest segregated public buses in 1961.

Ms. Mulholland and Dr. Patton reminisced about riding the buses and being incarcerated for nonviolent protesting. Although they both faced imprisonment and other consequences, nothing prevented them from continuing to exercise their First Amendment freedoms and fight racial segregation.

Both Ms. Mulholland and Dr. Patton pressed that, as student journalists and future leaders, my fellow Free Spirits and I must exercise all five freedoms to their fullest. I realized, in order to make the world a better place, I must seek and report the truth and inform the public on the injustices in our society.

Outside of the Newseum, we traveled to famous sites in D.C. I had traveled to D.C. a few times before, so I was familiar with a few of the basic tourist attractions; however, I was able to experience the nation's capital in an unprecedented manner. Even as I revisited monuments, the experiences were more entertaining and unique, and sometimes extended exclusive access.

One of the nights, we took a short bus ride to the Lincoln Memorial. I had only seen the memorial during the day. But at night, I experienced the memorial through a new lens.

The monument was almost empty in comparison to the usual bustling crowds during daylight. It was pitch black. I could feel the humid mist from the drizzling rain saturate the air. My friends and I navigated our way around puddles as we walked up the steps to view the immense statue of the 16th president. As we looked out atop the steps, the lights illuminated the sides of the Reflecting Pool and the towering Washington Monument from afar. Afterward, we circled around the World War II Memorial, hunting down each of our states' pillars.

Experiencing part of the National Mall at night was transformative. My friends from around the country who had never been to D.C. were mind-boggled by this site. We shared laughs, took pictures, read about our nation's history, and more. Although I had visited these monuments before, I felt an enhanced sense of patriotism and appreciation for our country shared among all 51 of us. Regardless of these historic sites being new or familiar, I think we were all really grateful to be together and cherish the rights, such as the First Amendment, our country grants us.

Besides touring the monuments of D.C., we were granted behind the scenes access to NBC Studios and USA Today.

At NBC, my fellow scholars and I watched a live broadcast of Meet the Press with Chuck Todd. Guests included Democratic Candidate for President Pete Buttigieg and Republican Congressman Steve Scalise. Shortly after, we heard from Chuck Todd in a Q&A. I had the privilege of asking him a question about how to moderate a discussion when it becomes heated.

I was ecstatic to converse with a respected broadcast journalist I watch on TV every Sunday. Observing the mechanics of running one of the longest Sunday news programs in action was also remarkable.

We also had the opportunity to visit other sites such as the Jefferson Memorial and The White House, take an exclusive tour of the United States Capitol, take a tour of USA Today's headquarters, and much more. It was an amazing experience to take advantage of all the opportunities and sites D.C. offers, especially as a passionate student journalist in the current hectic political climate.

By the end of the conference, not only could I say I know at least one person from every state with pride, but I also have connections and friendships that will last a lifetime. All 51 of us celebrated ourselves and one another. We compared and contrasted traditions, cultures, and even fast food restaurant chains in our respective states.

My fellow Free Spirit scholars and I are more inspired than ever to break barriers as student journalists. We are the next generation of storytellers, truth-seekers, and supporters of the First Amendment. And we intend to carry Al Neuharth's legacy of "Dream, dare, do." with us along the way. 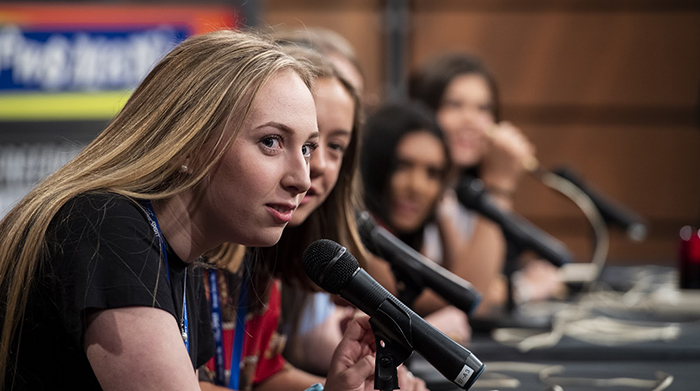 Photos are courtesy of the Freedom Forum Institute.