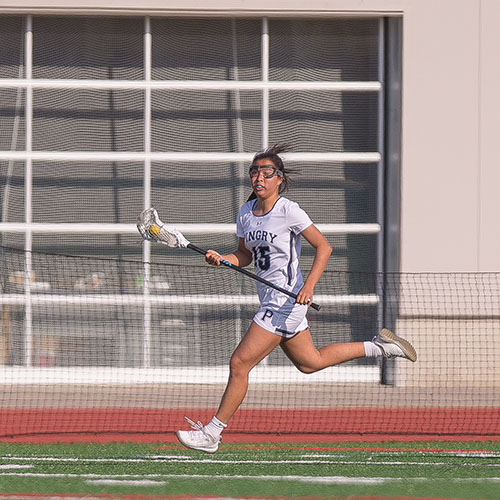 I've been playing lacrosse practically my whole life, picking up a stick in Kindergarten and playing with club and school teams year-round almost every year since. Lacrosse has always been a constant; I could always step on a field and know I'd enjoy myself. That being said, my first high school lacrosse season was an experience unparalleled in excitement and intensity, surrounding me with driven and supportive teammates, and I was eager to get back the following spring.

Our season effectively ended the day before our first scrimmage last April, and it's crazy to think it's been almost two years since the Girls' Varsity Lacrosse Team has played an official game together. Over a year has passed since the beginning of the pandemic; thankfully, this season we have a full slate of games scheduled, but one of our biggest challenges has been caused by the extensive gap since our last season. Returning players, who are all now upperclassmen, began the season still feeling like underclassmen, and much of the team is new to the program. Despite the new dynamic, we've pushed through the unfamiliarity with our collective excitement to finally play together. We're working to step up and fill our roles on the team and build chemistry both on and off the field. Each practice has been intense and full of hard work, and it's amazing to see how much we've improved in only a few weeks.

We've already played our first few scrimmages, and after such a long break, our team has brought to every game an even greater excitement and eagerness to play. Our goals as a team are, of course, to win as many games as possible as well as win the Skyland Conference and Somerset County Tournaments, but there's also an underlying desire to cherish every moment we're on the field.

As I'm writing this, our first game is tomorrow* and I'd be lying if I said I hadn't been subconsciously counting down the days. Our first game was originally supposed to be earlier in the week but was cancelled due to COVID-related reasons. Though the cancellation has only lengthened the months-long wait by another two days, it serves as a reminder that each moment I get to play is a privilege. I hope we get to play through this season as planned, and I'm excited to finally be able to compete and grow as a team. If this preseason's hard work and progress has been any indication, it looks like we'll have a promising season and I'm looking forward to seeing what we'll accomplish.

*Big Blue ended up winning their first game of season on April 23, a sound, 16-1 defeat of Phillipsburg.