Computer science is an extremely versatile tool, with applications not just in STEM, but also in the humanities. While I have often looked at this discipline in the context of other STEM fields, I wanted to conduct computer science research in an unconventional area and explore something new.

At a school assembly last year, I learned about a program—the Pioneer Research Program—to do just that. When accepted into the program, I was matched with Professor David Perkins, Ph.D. of Hamilton College, who was interested in relating generative art—a type of visual art that is created from an autonomous process, generally through the use of a machine or computer—to seemingly unrelated computer science algorithms. At the beginning of the summer program, I participated in weekly online seminars with a group of four students around the world in which Professor Perkins guided us to experiment with relating these algorithms to our works of generative art. Afterward, I honed in on a specific topic and wrote a research paper under the professor's mentorship. Throughout the program, I came to truly appreciate generative art as well as its applicability beyond aesthetics. 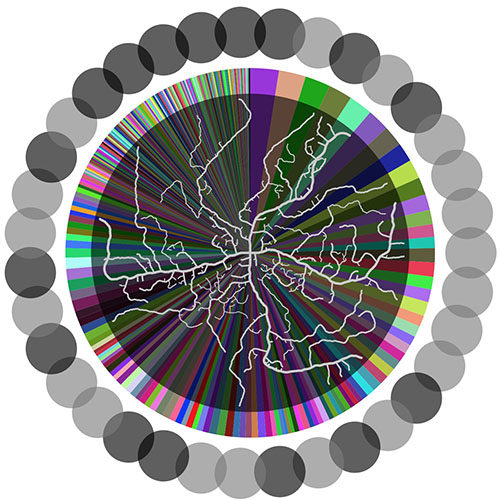 In generative art, the artist defines a "procedure," or a set of steps to create the artwork, which is then executed by a machine. Varying degrees of randomness are often introduced in a controlled manner to affect components of a given artwork. This introduction of randomness has two main benefits. First, the artist determines the extent of randomness, allowing him or her to balance the control of the human versus the machine in the creation of the works of art. And second, the artist does not have complete control over the finished pieces, which leads to discovery.

For example, in one of my pieces, I constructed a "fog" texture through the use of an algorithm (maximal Poisson-disk sampling) that simulates an even but random distribution of similar objects. In another, I used generative art to display the process in which the Simulated Annealing algorithm mimics the annealing, or cooling, of metal to accomplish the task of looking for the optimal solution of a function. This project resulted in particularly appealing pieces of art, and Professor Perkins found the amazing opportunity for my work (above) to be showcased on the cover of the October/November issue of FOCUS, the news magazine of the Mathematical Association of America.

As I furthered my investigation on this topic, I found that generative art could be treated as a tool to compare the performances of different algorithms designed for the same task. Specifically, I wrote a program that compares two versions of partitional clustering algorithms, which are used for grouping data based on their similarity, through the production of a piece of generative art. The various components of the produced artworks reflect different performance benchmarks of both algorithms. I wrote a research paper that includes this generative art and proposes a new partitional clustering algorithm. I am currently working towards getting this paper published.


Artwork: Julian's generative art was featured on the cover of the October/November issue of FOCUS magazine. View the full cover and issue, including a caption on page 2 explaining Julian's work.