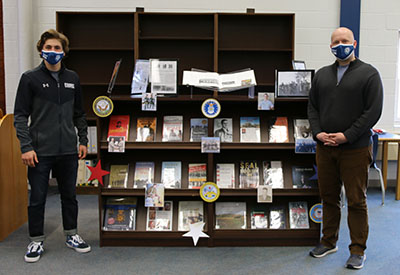 In the bustling halls of Pingry, nestled next to Mr. Touhey's office, lies a humble monument dedicated to the armed service members of the Pingry community. Plaques adorn the wall, honoring Pingrians who served in conflicts ranging from World War I to Vietnam, many making the ultimate sacrifice. Pingry's military pedigree is impressive, yet it seems to be an area of the school's history that is overlooked, condensed to a small section on a wall, only to be appreciated by the few who stop to observe. I feel that it is imperative for the members of the Pingry community who have given service to their country to be honored. This is one of the underlying values of the Veteran Affairs Club.

The Veteran Affairs Club is a diverse group of students interested in honoring and acknowledging those who served in the Pingry community, as well as the surrounding areas. Nick Zarbin '22 and I founded the club this school year, and we are fortunate to have English Teacher Dr. Ward as our faculty advisor. A veteran himself, and a former teacher at West Point and the Air Force Academy, Dr. Ward has immense knowledge on what it means to serve. The Veterans Affairs Club is a group effort; our club members are paramount to its success. Many of our members have family who have served, and some are interested in serving themselves. This notion confirms a positive trend in Pingry alumni joining the armed forces, with alumni such as Michaela Scrudato '13, John Hugin '13, Kyra Walker '14, Aidan Dillon '18, and Cathleen Parker '19 choosing to pursue a career of armed service. (You can read about them in the fall issue of The Pingry Review.) 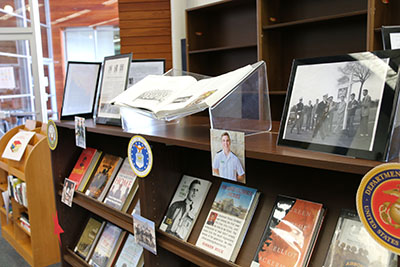 Veterans Day is the perfect opportunity to highlight those who have served in the Pingry community and we, as a club, began to brainstorm how we could present the holiday to our peers. An opportunity arose when Mrs. Fisher, a Pingry librarian, reached out to see if we would like to create a display—a bookshelf containing photos, articles, and books in the library. This seemed like the perfect medium to highlight some of the key veteran figures of our community, as well as to recommend works of literature that provide perspective on the military experience.

A picture on the top of the display, which can be found in the collaborative side of the library, highlights Pingry's most prominent alumnus, Admiral Halsey. William "Bull" Halsey, Jr., Pingry Class of 1900, was a fleet admiral during World War II known for his naval campaigns in the Pacific.

Atop the display as well are articles from the Pingry Record during World War II. These articles highlight Pingrians who were serving during World War II, allowing us to read about former members of our community who should be commemorated. When viewing the books, you will find works written by war-time correspondent and Pingry alumnus Richard Tregaskis '34. Mr. Tregaskis is best known for his diaries, which highlight his experiences alongside service members during World War II and Vietnam.

On the walls of the bookshelf are pictures of current Pingry teachers who have served: Dr. Ward, Mr. Bugliari, and Mr. Magadini. Images of the current and future service members of the Pingry community, including Michaela Scrudato, John Hugin, Kyra Walker, Aidan Dillon, and Cathleen Parker, adorn the display as well. The process of creating the display with faculty and the other members of the Veteran Affairs Club was amazing. I feel extremely grateful for everyone who took the time out of their day to help in its creation and those who will visit. Although our display cannot possibly highlight all of those who served, we believe it provides a glimpse into the rich military history of our school.

Photos: Jack (top left) and Dr. Barrett Ward, English Teacher and Veterans Affairs Club advisor, pose in front of the library display; a closer view of the the display.