The past few seasons have been some of the most successful in Pingry hockey history. The team has reached the Skyland Conference Championship three years in a row and has won the past two. The team has also made some noise in the Non-Public state tournament as last year we took down state-powerhouse St. Augustine and reached the quarterfinals. The team has endured many challenges the past few years, such as injuries, fatigue, and lots of uncontrollable factors that occur each game, but this year has brought along a set of unprecedented challenges. 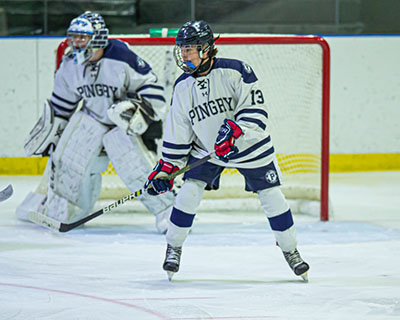 As an indoor, contact sport, hockey has been considered by many to be a COVID-19 super-spreader. The safety precautions have presented many challenges for the team to overcome. Players are required to wear masks on the ice and off the ice at all times. The start of the season was pushed back to mid-December, about a month later than the season would normally start. The end-date of the season remained the same, resulting in a shorter, more condensed season. As a senior, it is scary to know that any practice or game could be my last time wearing the Pingry uniform and representing my school. The day-to-day uncertainty is something that we've all adjusted to.

Perhaps the biggest challenge the team has faced has been finding a way to build team chemistry. Due to a shorter season, the team has spent less time together. Team chemistry is built in the locker room, which most rinks have banned the use of to enforce social distancing. Chemistry is essential to being a successful team. The seniors on the team recognize the importance of team chemistry and have adapted to find new ways to bond. Due to the start of the season being pushed back to mid-December, the annual Pingry hockey alumni Thanksgiving skate was canceled. Respecting the tradition and importance of the event, the seniors and their parents all pitched in to buy an ice slot on Thanksgiving morning in order to host the event.

As I am writing this, the hockey team is currently shut down for at least the next week and a half. This is a huge blow to the whole program, but specifically the seniors who may never get to wear the Pingry uniform again. I'd love nothing more than to be able to compete for a third straight conference championship, but unfortunately, this may not be possible.