The lead-up to the start of this cross country season has been a long one; however, I think it has been my, and my teammates', most effective one yet.

It really all started as soon as school closed last March following the initial outbreak of COVID-19. The team was sent spring training plans originally geared towards our track & field season, but after realizing the possibility of a track season was unlikely, Coach Horesta's plans shifted to focus on longer endurance training, one of the most important parts of cross country. 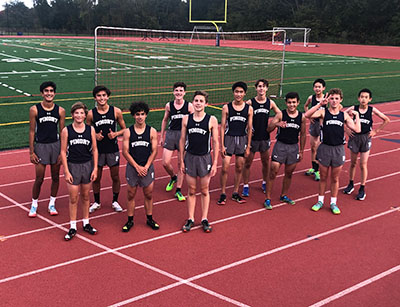 Unlike normal years, where we start training for the start of the cross country season in mid-June, this year's "preseason" started in March, and I was blown away with all my teammates' dedication. Getting out on the roads every day to run for the normal 45 minutes, or for twice-a-week workouts of quick 1000-meter repeats, or five-mile tempo runs, especially by yourself, isn't easy. It's particularly difficult to stay motivated when races are months away, which Coach Horesta is definitely aware of; however, he kept reinforcing the importance of staying in shape. Everyone on the team worked harder than ever before, which, just like our coach told us, put us in great positioning for the cross-country season ahead.

Going into our first group practice in mid-July, almost everyone had close to five months of consistent training under them, which usually isn't the case. Along with a lot of the other guys on the team, I was in the best shape I had ever been in, and my strong foundation only got stronger as we approached the beginning of the school year. For all of us, runs were easier and workouts were faster.

Our hard work manifested itself when we had one of the best two-mile time trials in our team's history: our top-two runners went under 11 minutes and our #3, #4, and #5 all finished around 11:30. Our devotion to our training paid off after performing well during our pre-season scrimmage and after beating long-time rivals Bernards–who consistently defeated us last year–in our first dual meet of the season. This victory showed that we've improved leaps and bounds from the team we were. I'm hoping that our season continues through in its entirety so we can continue to race and prove to ourselves and to our competitors that not even a pandemic can hold us back.


Photo: Sahdev (far left) and the rest of the Boys' Varsity Cross Country Team after their victory over Bernards last week.