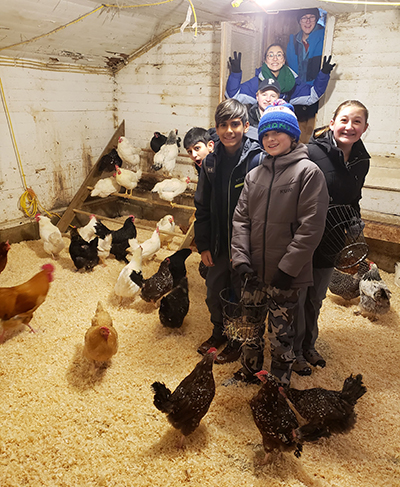 Charlie Ackermann '25 was one of five Middle Schoolers who spent six days over Presidents Day Weekend at the North Country School (NCS) in the Adirondacks, as part of a Pingry Global Field Studies Program. As he shares, their learning was hands-on, experiential, and yes, cold!

We walked in after the five-hour drive from Basking Ridge, N.J. The "Rock-E House" is what they call it [named for NCS benefactor Eileen Rockefeller Growald]. A big house—three floors, and nothing but space. The icicles on the roof sparkled like a starry night. This is gonna be a good one, I thought.

Driving down the road to do barn chores, it was -9º. Inside the van it was probably 0º. As we got on the road, we noticed the windshield. Foggy and bitter, that of an old man. We pulled over and cleaned off the windshield. Well, [Middle School Dean of Students] Mr. Coakley did. Juan, Jai, and I sat in the car, shivering.

Eventually, we pulled up to the barn and walked around the gleaming, red gate and into the facility. In addition to the four of us, North Country School (NCS) students helped care for the horses, chickens, goats, sheep, ram, and ducks. Usually, there are around 15 NCS kids helping out. Today, there were five. Ten people in all—the four of us from Pingry, the head farmer, and the five NCS kids. 10 PEOPLE, and 34 chickens, five ducks, 10 sheep, two goats, 11 horses, and one ram. We had to clean and replenish all of their areas, whether it was to collect the eggs or clear the manure and add new shavings to help the animals live in cleaner stalls. 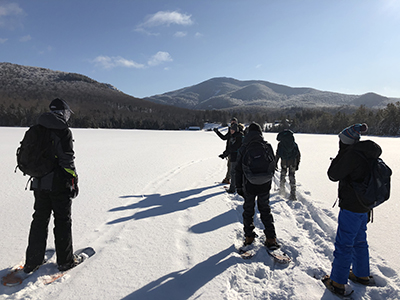 It was now -5º. As I raked the manure out of the stalls, I dropped a piece. The sound when it hit the cement was a noise that I never knew poop could make. It clattered, and it sounded like I dropped a rock on the ground. It hit hard, and sort of bounced up. That's when I knew that what I was doing was what a lot of people aren't willing to do. Kudos to the NCS kids, who freeze their you-know-what off every day to help these animals.

From this trip, I learned that hard work pays off. Of course, this is a common saying, but in this case, it's very obvious. You help the animals, and they become healthy and prepared to continue the journey that everyone ventures on—life. Life is what it's about. To live it well, and happily. To live it purely. There's a sensation of satisfaction, to let Him and everyone else know that you've been your best self. That's what matters.