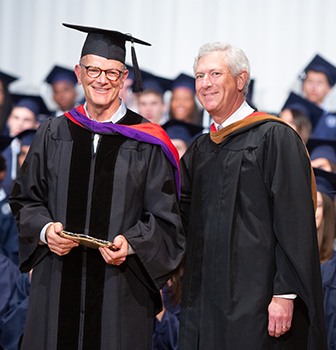 Ian Shrank '71, a member of Pingry's Board of Trustees since 2001 and Vice Chair since 2016, is the new Chair of the Board. He succeeds Jeff Edwards '78, who stepped down as Chair after seven years in the position.

Mr. Shrank has been working in the non-profit sector for about a decade. He currently is Director, Chair of the Programs Committee, and pro bono Legal Advisor for Per Scholas, and Chair of the Board and pro bono Legal Advisor at Hebrew Free Loan Society. Previously, he enjoyed a 40-year career as an attorney, specializing in financial products and insurance as a Partner at Morgan, Lewis & Bockius LLP and then Allen & Overy LLP. He received an A.B. in Experimental Psychology from Harvard College and a J.D. from Harvard Law School.

"I've been Counsel to, and on, a number of boards over the years, and Pingry's is the most impressive board I've ever experienced," Mr. Shrank said. "It's a combination of the Board members' intelligence and dedication to the School, and being focused on what's in the best long-term interests of Pingry . . . being Chair means more to me than becoming a partner in a major law firm."

Along with serving as a Pingry trustee for two decades, Mr. Shrank has chaired The Pingry Fund, is a two-time inductee into Pingry's Athletics Hall of Fame (1968 and 1970 Soccer Teams), and received The Cyril and Beatrice Baldwin Pingry Family Citizen of the Year Award (2019).