NJ.com's #1-ranked Pingry Girls Varsity Tennis won the Somerset County Tournament this weekend in dominating fashion, sweeping all five positions for a total of 25 out of 25 points, beating out Bridgewater-Raritan HS, Montgomery HS, and Hillsborough HS. Pingry's Coach Marion Weber called her team's performance, "a super effort on all courts," and added, "Winning all five flights is awesome." 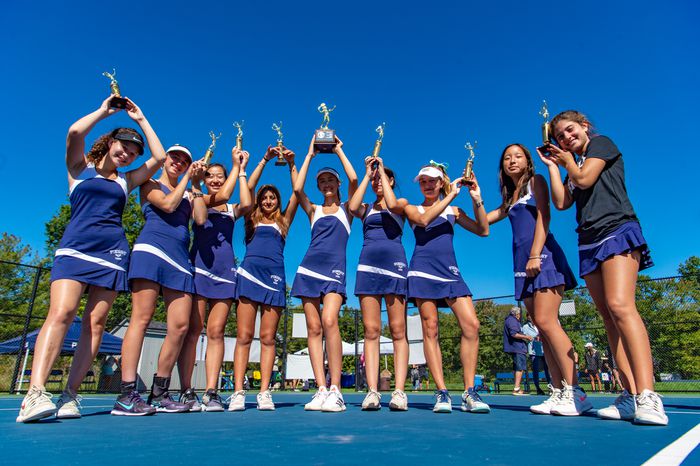 Awesome indeed, as the victory made it Pingry's third-straight title at the tournament, which was cancelled last season due to the pandemic. In the first singles final, Anika Paul '25 won her match 6-2, 6-1 and Sydney Langer '23 won her second singles final 6-0, 7-5. Sarah Kloss '22 captured the third singles final (6-2, 6-0) while winning all but two games during her three tournament matches.  At first doubles, freshmen Isabelle Chen and Leila Souayah won 6-3, 6-2 while at second doubles, Seniors Sabrina Schneider and Olivia Gallucci came away with a 6-3, 6-1 victory.

Pingry has yet to lose a match at any position so far in the young 2021 season, with 5-0 wins over Hillsborough, North Hunterdon, and Watching Hills. The team is looking to remain unbeaten as they enter a long stretch of tough opponents leading into the State and Conference tournaments in October. Keep it rolling, Big Blue Girls Tennis!