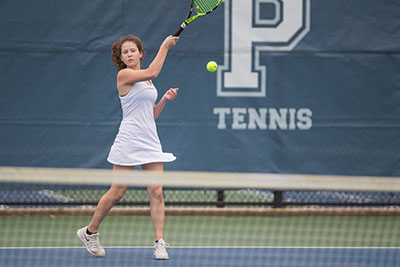 While COVID-19 required many changes to the season, including fewer overall matches and the cancellation of the country and state singles and doubles tournaments, Big Blue came through again, defeating Notre Dame, 5-0, for a Central West Region C victory. The win marks the team's ninth state title in the last decade.

"It's really awesome," senior captain Caeley told NJ.com reporter Chris Nalwasky. "All four years of my time here we've won our state section. Even though we had a shortened season, to win it again, it's awesome. With the coronavirus, I'm just happy we were able to have a season. I was worried we weren't going to play."

Undefeated at 10-0, the team led the Skyland Conference Delaware Division before COVID-19 and quarantining protocols ended the season early.

"Despite the challenges presented by COVID-19, the team has had a fun, competitive, and successful season," said Head Coach Marion Weber. "We are proud of all we have accomplished!"