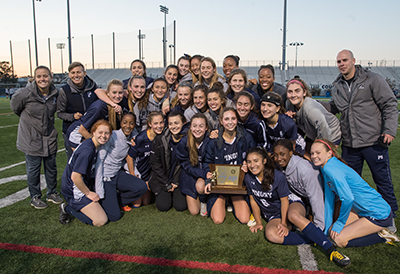 In an early-September article posted to NJ.com, reporter Brandon Gould addressed the fact that three impact players for Big Blue had returned following interludes with their respective club teams, giving the team a new look, and a renewed competitive edge. "There is a really good mix of talent, hard work, and a positive mindset with the returning Academy players and last year's returning group," Head Coach Lauren Molinaro was quoted as saying in the article. "The pride we have for our community and our institution takes over and unites us. It should be a very fun season." Fun indeed, and, nine weeks later, there's proof that the season has also been incredibly successful.

Big Blue, 8-8-2 last season, has improved to 15-6-1 this season. Their early, regular-season match-ups were promising, but as team's cohesion grew, their talent really began to shine. In October, they celebrated a 2-0 shut out of powerhouse Ridge to advance to the semifinals of the Somerset County Tournament, their first appearance in several years. 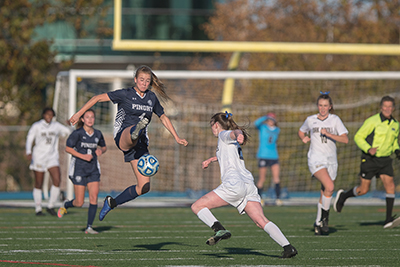 Even more thrilling was their state tournament run this month. In a nail-biting, 4-3 overtime victory over Notre Dame on November 2, sixth-seeded Big Blue advanced to the semifinals of the NJSIAA Non-Public A South Tournament, where they faced second-seeded Bishop Eustace. Following a decisive, 4-1 victory, they advanced yet again, this time to the finals, on November 8, where they faced top-seeded Red Bank Catholic, ranked #14 in the state by NJ.com. Their impressive, 3-1 win marked the first time since 2012 that the team has won a sectional title. As Gould reported for the game, "[The team] faced an uphill climb as the #6 seed, but found a way to get the job done."

"This is a lot different than Academy soccer," said Alexandra Weber '20, in an NJ.com article after the game. "Here, you get back to the foundation of soccer and you realize why you love it and to be able to win a state title is incredible. Playing with your friends is something you don't always get to do and that is what makes high school soccer so special."

Coach Molinaro shares her thoughts on the team's progress this season:

"From the start of preseason, we had very high hopes for an outstanding performance this fall, yet towards the end of the regular season, it seemed as if our 2018 performance was going to be a little disappointing. Despite a dynamite group of returning Pingry and Academy players, we had our share of injuries, illnesses, and upsets. Then, the day of our last regular-season game, we decided to change. We decided we were tired of being average, we were tired of underachieving, and we were tired of settling for less than the very best, and we got to work. Day in and day out, the girls focused, and trained, and tried, and rallied together with all of their might behind our slogan, 'Earn everything.' From the girls on the bench to the field to the managers, they banded together and they put in the effort. They stared the #1, 2, and 3 seeds of the NPA South division in the face and conquered them, and then they defeated the winner of the North. If you ask me, it's all because this courageous group of 27 girls with different personalities, different strengths, and different ideas decided to work together towards a common goal, being the best. They earned this state title, and I couldn't be more proud."

Read on for more details and photos from the state tournament games:

Non-Public A Finals against Oak Knoll