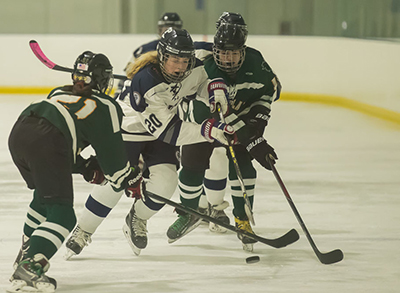 They opened their season with a 10-game winning streak over perennially dominant teams such as Chatham, Oak Knoll, and Princeton Day. It wasn't until they faced Oak Knoll for a second time at the end of January that they met their first loss. Seeded second in the Prep Tournament—their highest seed yet—they rolled past Kent Place in the semifinals on February 6, and fell just shy of the trophy, losing to Morristown-Beard, 4-3 in overtime.

Captains Lizzie Gilfillan '20, Annie Oatman '20, and Allie Moss '20, who surpassed 100 points this season, are leading the team, which marks its second season in the Morris/Somerset/Union Girls Ice Hockey League (they finished third in the league, behind Kent Place and Summit).

Up next, on February 28, is the quarterfinal round of the inaugural NJSIAA State Tournament. Big Blue, seeded third in a field of 12 teams, will face the winner of today's Summit/Randolph game.

Head Coach Annis is excited about the first-ever state tournament, and the team's prospects. "We have to work really hard—Summit has good skaters," she says. At the beginning of the season, the team met with Upper School Psychology Teacher and Mental Performance Coach Brandyn Fisher to set their goals and discuss what kind of team they want to be. Yesterday, with the end of the season in sight, they reconvened to strategize how best to work together. "I'm excited to see how they play against Summit," added Coach Annis. "We have systems in place that have worked all year, and when we play within those systems we're very successful."

Photo: Charley Bush '23 battles for the puck in the Prep semifinals against Kent Place earlier this month.