Mr. Francis Odeh, who arrived at Pingry last fall to assume the roles of Head Coach of the Girls' Varsity Squash Team as well as Associate Director of a vibrant and growing squash program, has recently been named the program's Director. He will continue to serve as Head Coach of the girls' team. 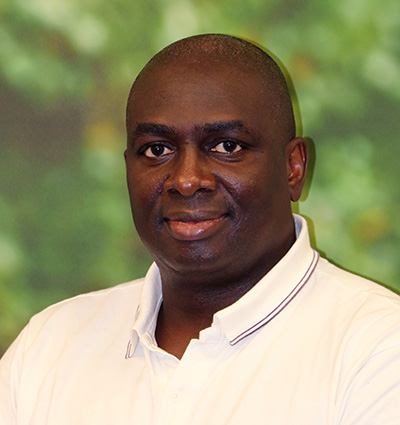 Mr. Odeh, who holds a US Squash Level 2 Coaching Certification, brings over 25 years of coaching experience to bear as he takes the helm of the Girls' Varsity Squash Team and serves as overall School Squash Coach for Pingry squash programs. He has served as a Squash Pro at the New York Sports Club and Downtown Athletics Club, both in New York City, as well as at The Club at Ricochet in South Plainfield, and Valkyrie Squash Club and Monmouth Squash Club in Sea Bright. Mr. Odeh earned a B.A. in Physical Education and Sports at Lagos State University.

He has worked with numerous junior and adult squash players in the U.S. and abroad, including such notable athletes as former Nigeria #1 and PSA world ranked Ehimen Ehalen and U.S. #4 and PSA world ranked Christopher Cordon. He also has extensive experience coaching several of Pingry's very own, including Peter Cipriano, who played for Bowdoin College, Chloe Blacker and Jonathan Zeitels (University of Pennsylvania), and Julia '17 and Diana '15 Masch (Columbia University).

Head Coach of the Boys' Varsity Squash Team, Ramsay Vehslage, has known Mr. Odeh for over 15 years and is excited to have him join the program. For her part, Director of Upper School Athletics Carter Abbott noted, "Francis brings a wealth of coaching experience to our squash program. His enthusiasm and knowledge will serve as a great combination for continued success for Pingry squash."