The "Dream Team"—a group of faculty, staff, and students from the Middle and Upper Schools—gathered onstage in Hauser Auditorium in January to honor the legacy of Dr. Martin Luther King, Jr.

The program resulted from thoughtful planning on the parts of students, faculty, staff, and parents. "We wanted to make sure that as many people's voices were heard as possible, including feedback during rehearsals," Ms. Barnes says. "We also wanted to represent Dr. King's idea that civil rights are for everyone, so the assembly was open to whoever wanted to participate—it was truly organic."

Speaking of the music and choreography, Ms. Barnes selected "Rise Up" as a "beautiful, uplifting song that captures Dr. King's message of togetherness" and explains that it was performed as a liturgical dance. "It's also known as a 'praise' dance that serves as an expression of praise or worship. The song itself has slower portions, so the students wanted their own dance moves during the faster music. The ribbons tied the dance styles together, as a visual showing of unity."

The Latinx, Black, and East Asian Affinity Group letters were written specifically for the event because, Ms. Barnes says, "A lot of students have a lot of emotions and thoughts to share. They want to make their voices heard, share their truths, and express themselves. Some of the students exchanged their letters with each other afterward."

Overall, Ms. Barnes was delighted to help coordinate this homage. "It was a great moment for the community to come together, and a special project to be a part of because of the outpouring of emotion afterward. Many students said that it was a really specially assembly."

In My Own Words: Norah Jacob '26
Norah volunteered to participate in the assembly and danced to "Rise Up"

The assembly was fun to do, and a lot of people worked hard on it, to acknowledge Dr. Martin Luther King, Jr. and honor his legacy. It's an important holiday to celebrate because Dr. King changed history—the assembly and our dance made people want to be more involved in future assemblies or do something to take action on human rights.

It's important to take action on what you believe in, and feel confident enough that your opinion matters and should be heard. The dance made my opinion heard. There's always going to be racism and some kind of discrimination, but the assembly can change perspectives. With any assemblies on race or ethnicity, Pingry shows that it appreciates and celebrates [all cultures]. I've been here since Kindergarten, and they've always showed and taught not to discriminate. Pingry is a welcoming place. Even students who joined this year know Pingry is a place where you can feel comfortable and proud. Pingry provides lots of opportunities for people to feel comfortable with their own race. 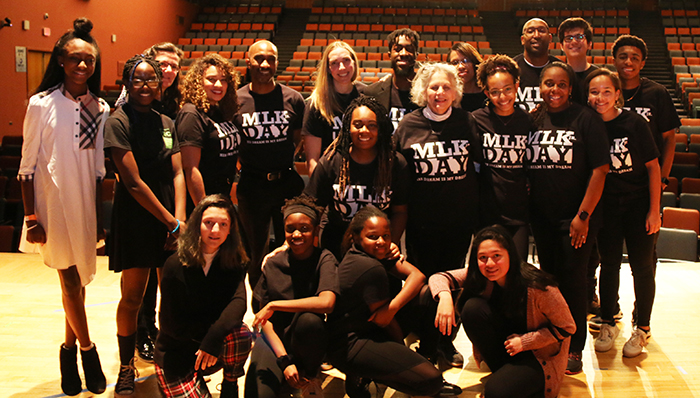