To ensure the reopening of school last September—and to ensure that it remains open throughout the school year—the Pingry community has achieved some pretty noteworthy successes.

To name a few, the launch of the school's first-ever flexible learning model, Pingry Anywhere; equipping countless classrooms with the technology necessary for remote learners, not to mention abundant plexiglass partitions; the distribution of well over 5,000 masks, face shields, and protective eyewear; twice weekly COVID-19 testing; and the creation—in record time—of an in-house team of contact tracers, 12 indefatigable Pingry employees working to keep the community safe.

Given the daunting logistics, Pingry is the only private school in the area with its own contact tracing operation (most rely on local Boards of Health to track cases). Discussions began last spring and summer, when intensive efforts about how to safely reopen school in the fall were underway, well before the School launched its coronavirus testing program on October 8. 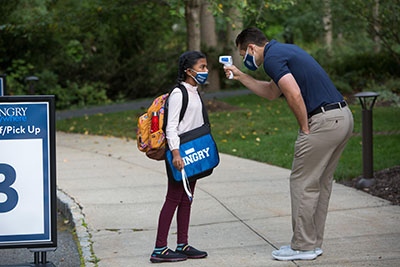 "We knew that when we learned of positive cases through testing, we would have to act quickly to stop the spread," explains David Fahey '99, Director of Operations, Safety, and Strategic Initiatives. "Ideally, we didn't want to have to close school or even an entire classroom, so we knew we'd have to find out who was at risk as a result of a given case." After a great deal of research as to possible solutions, Mr. Fahey realized that the most efficient, reliable way to keep the community safe and the school open was for Pingry to build its own contact tracing program.

Three months in, it's a well-oiled machine. Currently, 13 Pingry faculty and staff, all certified by courses through the New Jersey Department of Health as well as the Johns Hopkins Bloomberg School of Public Health—over 10 hours of total online training—serve as Pingry's contract tracers. Adding to their already busy workloads, they have put in countless hours in their new role.

In partnership with Mirimus Labs in Brooklyn, pooled saliva-based testing takes place on Pingry's campuses twice a week (the school shifted from once-weekly to twice-weekly testing on December 9).

Say, for example, a single "positive pair" is identified during a given round of testing. The contact tracers reach out to both individuals, walking them through the process of obtaining a PCR test to identify the infected individual. Typically, results of a PCR test can take days, but Pingry has also partnered with a third-party lab in Boston, Meenta, which, within just six hours, receives the positive-pair data from Mirimus and can diagnose which member of the pair is actually infected.

While awaiting the results, contact tracers conduct a detailed, 1.5-hour phone interview with both individuals to determine who, over the last three days, they were in close contact with (within six feet for longer than 15 minutes, cumulatively). Class schedules and seating charts are cross-referenced. The introduction in November of contact tracing sensors for all students, faculty, and staff has significantly eased these efforts. Small devices, placed either inside a wristband or on a lanyard, the sensors track their proximity to, and how long they are near, other sensors.

"I look up their sensor data before I even have a conversation with someone," explains Mike Saraceno, who, when he's not busy contact tracing, is Assistant Strength and Conditioning Coach, teaches Intro to Fit to Upper Schoolers, and serves as an advisor. "You often pick up a name on the sensor that the person forgot to tell you about. It's the synergy between the two—the detailed conversation and the sensor—that really gives us accurate data." With an interest and proficiency in data science related to human performance, Mr. Saraceno was a top pick for Mr. Fahey when he reached out to internal candidates to serve as contact tracers. 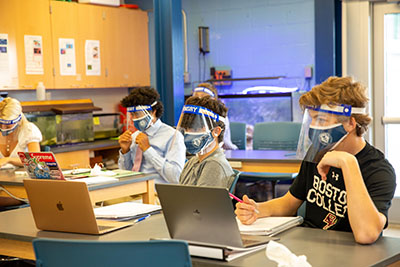 Mr. Saraceno is also careful to consider interactions during flex times and conference periods (CP), other areas where the sensors have proven to be an asset. "I can look at a class schedule, but if that student visited a teacher during CP, that's not on the schedule and that teacher could be at risk. With the sensors, we can account for that," he adds.

This school year, his—and indeed all the contact tracer's—days are long, upwards of 18 hours when he's actively contact tracing. As soon as Mirimus Labs notifies Pingry of positive pairs, typically 12 hours after the collection of the tests, the contact tracers get to work. Twenty-four hours later, they are generally done. This means phone interviews happen well into the evening hours, sometimes until midnight, Mr. Saraceno says. "It's a real sacrifice to his family time," Mr. Fahey acknowledges.

When he is not making contact tracing calls, he and the other team members are uploading data and managing the dashboard on pingry.org, built by two young alumni, which tracks positive cases, those in isolation as well as those in quarantine. He is also working continuously to improve their processes—adjusting language in emails that automatically go out to families explaining the quarantine or isolation procedures, and overseeing the internal system, communicating with those who come off quarantine or isolation to provide them with the information and support necessary to return to school in-person.

Mr. Saraceno and other contact tracers are also sure to share their information with the Livingston and Bernardsville Boards of Health.

Even Saturdays and Sundays, when contact tracing is almost always underway, he's often working 13-hour days. "It's nonstop, 24/7," he says. "But I come from a family of service—my brother is a Captain in the Air Force and other family members are firefighters. Service is ingrained in me. I genuinely love the Pingry community, and am glad I can help in this effort."

Thus far, a large percentage of Pingry's positive cases have been asymptomatic, underscoring the importance of the school's routine testing and contact tracing efforts, not to mention the mask, plexiglass and/or protective eyewear, and distancing protocols. Five months into the school year, and not a single case of in-school "spread" has been demonstrated among students, proving again that the efforts of Mr. Saraceno and Pingry's other contact tracers are invaluable. 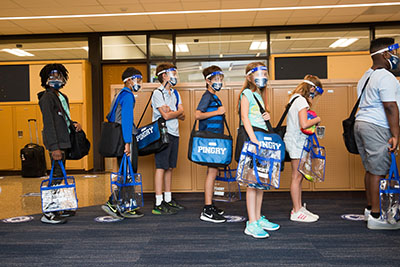 "That's a very positive statistic," he says. "It cements the fact that what we're doing this year, with all the safety measures we have in place, it's working." He's quick to emphasize what a team effort it has been, testament to the power of the Pingry community. "I'm very lucky to work with so many extremely talented, smart, and selfless people from all different professional realms. We are able to work in unison with one purpose in mind: keep our community safe, and do it [contact tracing] better and faster for the next time. I am very grateful for them."