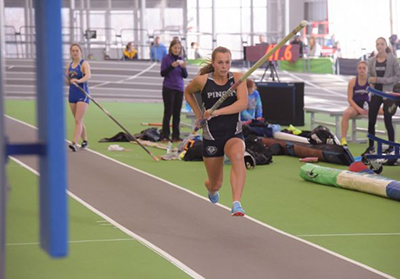 At the NJSIAA Non-Public A Track & Field Championships at the end of February, Caroline Dannenbaum '20 secured her second straight pole vault title, clearing 12'6.5 to set a new Non-Public A (NPA) and All-Group meet record. She didn't stop there. A week later, at the Meet of Champions (MOCs), she cleared 12'7", taking gold—also for the second year in a row—and breaking the all-time MOC record. It was her fifth first-place finish this season—in addition to gold at the Group  Championships and MOCs, she won the Skyland Conference Championship (12'6-1/4"), the NPA Relay Championships (12'6"), and the Lavino Relays (11'6").

As a culmination of her record-breaking high school career indoors, Caroline, who will vault for Vanderbilt University next year—was named NJ.com Girls Winter Track & Field Athlete of the Year.

New Balance Indoor Nationals, slated for March 13–15, was an opportunity for her to try for a personal record of 13'. She was disappointed when it was cancelled due to COVID-19. With the outdoor season in flux, she nevertheless remains optimistic. As she told an NJ.com reporter, "My track club is closed as well as the gym I work out at, so right now I'm just focused on finding different ways to stay in shape and work on my technique. . . Hopefully we can still play out the end of the season and championship meets in a few months."

Congratulations, Caroline, and all Pingry's indoor track and field athletes this season!