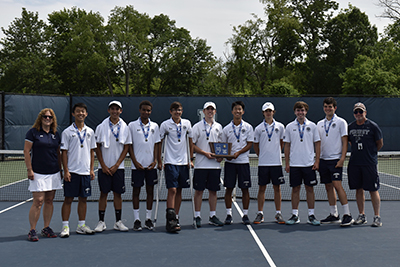 The Boys' Varsity Tennis Team began their season in mid-April on an auspicious note, racking up five consecutive shut-out wins in short order. They have been relentless ever since, finishing the regular season undefeated (16-0) and earning top honors in the Skyland Conference. They also blazed their way through the Somerset County Tournament and, in the finals on May 22, came away with the trophy.

To cap their successful season, Big Blue—ranked #3 in the state—clinched the NJSIAA Non-Public South sectional crown on June 2. (They last won the title in 2019.) In their tenth—yes, tenth—shut-out victory of the season, they defeated Ranney, 5-0, in the final round of the state tournament. Co-captain Hugh Zhang '21 (first singles), Sam Henriques '22 (second singles), and Caleb Park '23 (third singles) all secured wins, as did first and second doubles teams Ryan Burns '23/Miles Kelly '24 and co-captain Walker Johnson '21/Asher Matthias '23.

On Monday, they faced powerhouse (and the #1 ranked team in the state) Newark Academy—also undefeated—for the overall Non-Public title. Despite a strong effort, they fell to the Minutemen, 5-0.

"Ranked #3 in the state, the team has lived up to and exceeded our expectations," says Head Coach Marion Weber. "The support within the team is tangible, and we have accomplished all the goals set during preseason. After last year's missed season due to COVID, we are all thrilled with the play and achievements this year."