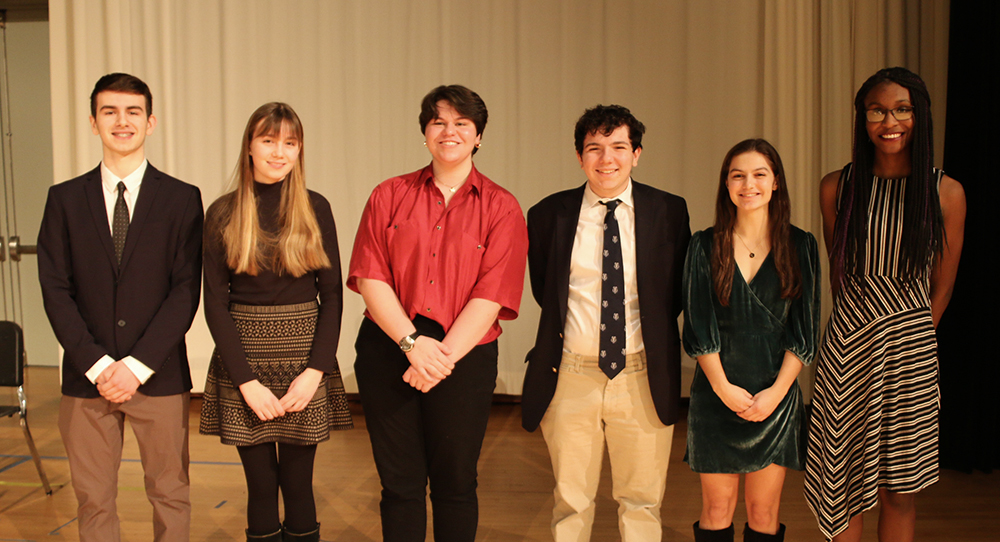 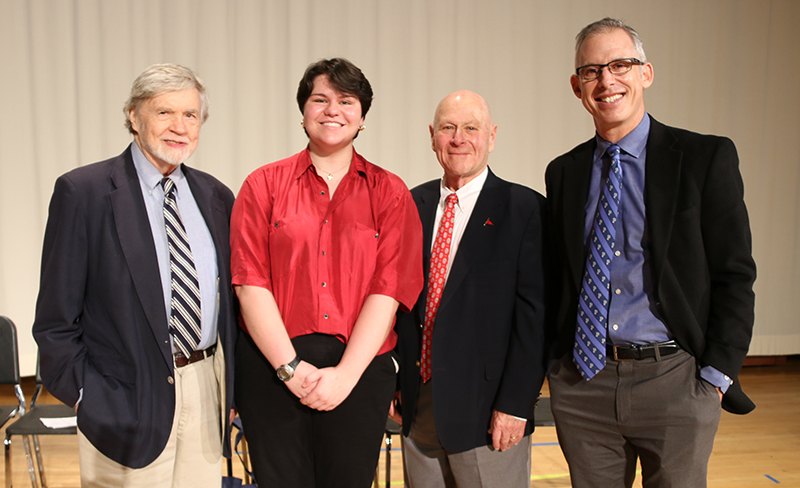 The competition, in which students speak for four- to six-and-a-half minutes on a topic of their choosing, was funded in 2005 through the generosity of the Class of 1958, led by the late William Hetfield, in memory of their classmate. Dr. LeBow was an accomplished public speaker, addressing audiences worldwide about the need for health care reform. While working for the U.S. Agency for International Development, Dr. LeBow and his wife Gail lived in numerous developing countries and provided medical services to underserved populations. Dr. LeBow is the author of Health Care Meltdown: Confronting the Myths and Fixing Our Failing System, a book drawn from his public speaking engagements.

Dr. LeBow's classmates Ted Walter, Jr. '58 and Dr. James G. Smith '58 attended the competition. Dr. Smith noted that, every year, he is impressed by the "intelligence, sensitivity, and warmth" of the students who compete. Speaking of his late classmate, Dr. Smith addressed the question, "What does success mean?" In his view, Dr. LeBow was successful because he did the best he could for himself, and gave—his was a life of giving to others in need.

Martine Bigos ("Schlemiel, Schlimazel"), taking her cue from the often-teased, but talented, character of Garry on the NBC comedy Parks and Recreation, questioned how others perceive her—to the point that she has constantly analyzed herself. But, she noted, Garry is happy, and she realized that she feared being like someone who was happy. "Don't be defined by your worst mistakes," she said. "See the good in yourself. Let go of the little things."

Noah Bergam ("Big Fish in the Pingry Pond"), referencing the Global Climate Strike in September, lamented a School culture with a "deeply entrenched taboo on politics and debate"—not talking about anything "timely" or "messy" in class. He posed the question, "To what extent does an essay teach you to argue?" noting that essays seek perfection and don't require back-and-forth discussion. "Debate isn't about winning—it's about learning . . . disagreement is tiresome and messy, but it's necessary."

Cal Mahoney ("Cancelling Cancelling") recalled a minor fender-bender while driving to school for the first time—specifically, their horror, followed by relief when the other driver noticed the red sticker on Cal's license plate and the look of panic on Cal's face, and got back into his car. "Mistakes are inevitable when someone is new to something, but how you respond to them is up to you," they said. "Learning and progress are made infinitely harder by shaming and shunning . . . it's impossible to be 100% correct at any given time." Cal cited the example of society becoming more open to people whose identifiers don't fit into pre-existing categories, but as the number of potential identities grows, "it's getting harder to achieve political correctness." Cal wants to see an end to "cancel culture," when someone's behavior has been deemed unacceptable. People are going to make mistakes, they said, but it's necessary to approach a situation with compassion and help people learn. "Kindness lasts a lot longer than a dent in your bumper."

Alex Kaplan ("The Pursuit of Passion") signed up to perform in The Wizard of Oz when he was in Grade 5, and it changed his life because he realized drama is his passion. The challenge, he observed, is that it's more difficult to integrate drama into his schedule because of the focus on "non-passions." Why? Adult guidance that certain disciplines are more likely to lead to a viable career. Alex argued that passions offer inherent benefits and life lessons, and that "life has room for work and passion."

Ajuné Richardson ("The Color of Music") knows that, in America, she is African American, above other identifiers. She grew up listening to artists such as John Legend, Miguel, Ne-Yo, and Maxwell. But her friends and family called her "white" so frequently that she disassociated herself from anything known as "black." "If there's one thing I've learned about racial prejudice," she said, "it's that it's the most disappointing when it comes from your own race." She began listening to alternative rock and straightening her hair. Time has passed, though, and with reflection, she has returned to the music of her younger days, is again embracing her identity as a "young black woman," and is "proudly African American."

Carolyn Coyne ("Tell Me About Yourself") posited that "Who are you?" is a tough question because people's instinct is to give quick, easy, non-confrontational facts, rather than take the time to understand their personal values and who they really are. She argued for the importance of alone time—taking a break, for self-care and self-reflection. "Our dominant culture," she said, "favors easily recognizable external achievements over the internal victories of self-care."