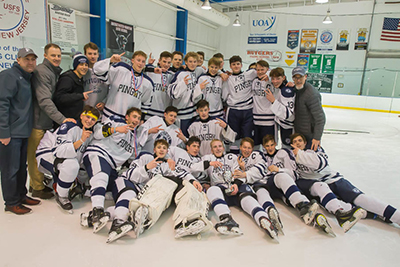 Just 15 seconds into overtime this past Saturday, Jared Kordonsky '21 found the net to give Big Blue—ranked #17 in the NJ.com Top 20—a 3-2 victory over Hunterdon Central and its second straight Skyland Cup title. The game-winner came after goals from Ryan Bush '20 and Peter Korn '21, and 20 saves by goalie Kevin Parnham '21. Jared, who, along with Eric Bush '21, surpassed 100 career points earlier in the season, was voted MVP of the game.

The team fell, 4-1, to the Red Devils—who hadn't lost a game since January 3—in early January, making the victory even sweeter. And it capped another successful regular season for the Boys' Varsity Ice Hockey Team (13-2-3), which, last month, also earned a #1 standing in the Skyland Conference for the second year in a row.

"We fell behind, 2-0, in the game but the guys showed their resilience and perseverance by battling back to 2-2. Our mental toughness has developed tremendously over the course of the season," said Head Coach Scott Garrow of the game. "We spoke before overtime about coming out ready to play because many overtime games end early. We made a simple play off the opening face-off and, with an outstanding individual effort by Jared Kordonsky, the game was over 15 seconds later."

Coach Garrow, who is in his fourth season with the team, noted his pride. "Back-to-back regular season and Skyland Cup Championships are a testament to the commitment the players have to each other and their consistent work ethic."

The team will face St. Augustine in the first round of the NJSIAA Non-Public Tournament, set for February 28.