Riding a high from their second consecutive state sectional victory last Thursday, the Girls' Varsity Soccer Team (17-5) was more than prepared on Sunday to repeat their historic 2018 season and end, once again, as non-public champions. And they did just that.

DePaul Catholic High School, #15 in the NJ.com Top 20, was no match for Big Blue's "loaded offensive attack," according to NJ.com, an attack led by the state's leading scorer, senior captain Madisyn Pilla. She netted two goals, and teammates Elle Dziadzio '21, Leah Mangold '20, Olivia Volpe '20, and Alexandra Weber '20 added one each for a decisive, 6-0 shutout. A mere week ago the team didn't crack the NJ.com Top 20, but their back-to-back state victories earned them a final season ranking of #8. 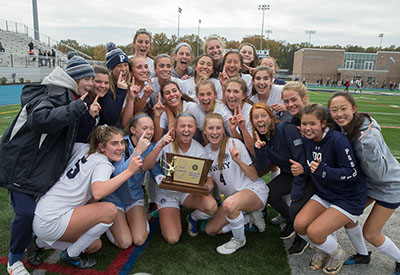 Below, two of the team's three captains—Leah Mangold '20 and Sofia Lombardo '20 (Emma Capanna '20 is the third)—reflect on their season and victory.

"Winning states for the second year in a row, and especially as a senior, was an unreal feeling. . .  When we lost in counties, it took a toll on us emotionally but we did a really good job refocusing and realizing what we needed to do to be successful in states and defend our title. We started to find the right balance between having fun while also working really hard in practice. I'm so proud of our team's character, our grit, especially this year, has been exceptional, as we have been put in so many positions where perseverance was required. What got us through was each other, and I believe that we stood true to the concept of a 'team effort' this year, and I could not be prouder of us, all of us."—Leah Mangold '20

". . . Another activity that gave us motivation going into the state tournament was writing down our WHYs. Each of us wrote a sentence or two describing why we love Pingry Girls' Soccer, why we compete, or why we wanted to win. This activity focused me towards my goals, reminded me of how much I loved PGS, and helped me give 100% each day for the remainder of the season. [Head Coach Lauren Molinaro] told us that the most common answer to why we wanted to win was for each other. I think this speaks to the program itself. We have always been more than a bunch of girls who play soccer, especially the senior class. We are a close-knit group on and off the field and competed each game of the tournament for our teammates. So, when we all decided we wanted the state title, nothing was going to stop us."—Sofia Lombardo '20

Read the full article and check out the photo gallery.