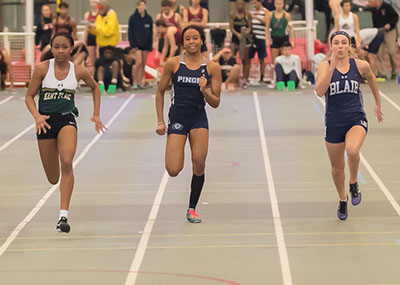 Last seasons' highlights: Last season, led by captains Cathleen Parker '19 and Ally Lima '19, the team completed a successful season, taking third at both the Non-Public A Championships and the Prep A Championships, and earning a second-place finish at the Skyland Conference Championships. At the Meet of Champions, pole vaulter Caroline Dannenbaum '20 won gold, clearing 12'6" to equal the school record set by her sister two years earlier. Nicole Vanasse '20 finished second in the 3200 meters in 10:39.93. (Both athletes took first in their respective events at the state championship two weeks earlier, and qualified to compete at the prestigious New Balance Nationals Indoor.)

Full-court press:
"We're working hard in the winter weather. We go out in the rain and we get through the day without complaints. We face intense competition along the way at big meets, but the girls are always ready to help out and run something if we need them."—Head Coach Shilts