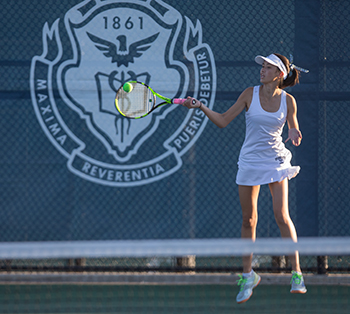 Last season's highlights:
The 2020-21 Girls' Varsity Tennis Team, led by captain Caeley Feeney '21, faced many new challenges due to the COVID-19 pandemic. The season was shortened, and neither the Somerset County Tournament nor the Prep A tournament took place. However, despite the adversity the team had to face, the girls had a successful season and finished undefeated with a 10-0 record. Additionally, the team worked hard to finish as sectional champions and first in the Skyland Conference Delaware Division. The team also worked its way to the high ranking of #4 in the NJ.com Top 20.

What to watch for this season:
· The team will be led by captains Sarah Kloss '22, Sabrina Schneider '22, and Olivia Gallucci '22. They helped lead a competitive preseason, with five returning varsity players and a group of talented freshmen competing for a position on the varsity team.
· The team will be deep and loaded with talent this season. Players are versatile and can play singles or doubles.
· The team is looking forward to returning to its regular schedule, which includes both the County and Prep Tournaments.
· Coach Weber's goals for this season are to improve on previous years' successes by remaining undefeated in the Skyland Conference (2020) and repeating as County Champions (2019). She also hopes the team can win its section and make it to the Tournament of Champions.
· The team's first match this year will be at home on Thursday, September 9 against Montgomery High School.

Full-court press:
"The Pingry Girls' Tennis program is strong! We will be looking to have a fun, competitive, and successful season. I'm excited to build on the success of past seasons and see where the team can go!" —Head Coach Marion Weber