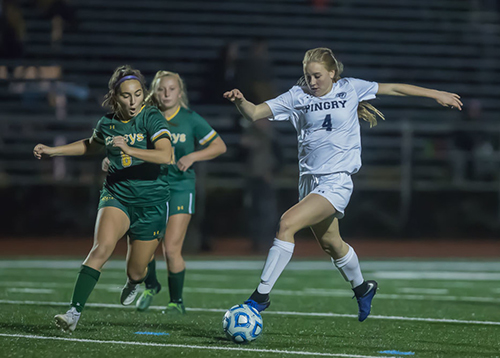 Last season's highlights:
Last year, led by captains Abby Beckman '19, Ava Dziadzio '19, and Caroline Friend '19, the Girls' Varsity Soccer Team had one of their strongest seasons in recent history, finishing with a record of 15-6-1 (during the 2017-18 season, they were 8-8-2). Seeded #6 in the NJSIAA Non-Public A South Tournament, they defeated Red Bank Catholic, ranked #14 in the state by NJ.com, with a 3-1 win to take home the sectional title. In the finals of the NJSIAA Non-Public Championship, they went on to defeat Oak Knoll for an even more competitive state crown. The team also had earned an appearance in the Somerset County Tournament semifinals.


What to watch for this season:
• This year's captains, Emma Capanna '20, Sofia Lombardo '20, and Leah Mangold '20, look to continue the team's postseason success in hopes of defending their state titles and winning their conference. Head Coach Lauren Molinaro says that the team is excited to be "getting back after it, getting together, and looking to compete and achieve at a high level like we did last year."

• Losing only one player on the starting lineup to graduation, the returning starters hope to capitalize on their cohesion and confidence for more success. According to Coach Molinaro, the key to a strong season is the team's confidence and believe in itself.

• The team's opening game is at home on September 7 against North Hunterdon.


Full-court press:
"When you have had such a successful season in the past, it is tricky to come into the following season and figure it out. The big thing is that our competition knows who we are. They know that we're good, they know that we have the ability to do great things . . .  I think we're carrying with us that confidence that we are a force to be reckoned with and that we've done it before and we can do it again." —Head Coach Lauren Molinaro