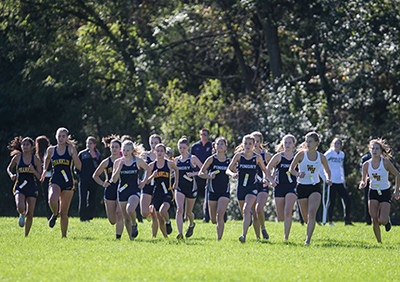 Last season's highlights:
Captained by Cathleen Parker '19 and Nicole Vanasse '20, Big Blue had a strong season, earning a second-place finish at the Prep A Championships. In mid-November, Nicole, who won the event for the second-straight year in a brisk 18:31, and Alina Irvine '21, who placed ninth, led Pingry to a fourth-place finish at the NJSIAA Non-Public A Cross Country Championships. With their finish, the team narrowly missed a Meet of Champions appearance, but Nicole and Alina advanced individually.

What to watch for this season:
• Nicole, the only senior on the varsity team, will be leading a very young team this year, alongside her co-captain Alina Irvine '21, to round out a very successful high school career. Called "one of the top distance runners in the country" by NJMilesplit, Nicole is back after an injury sidelined her during the outdoor track season last spring. A PR of 18:16 at last fall's Foot Locker Northeast Regionals made her the first Pingry female runner ever to earn entry to the prestigious Foot Locker Cross Country National Championships in San Diego, considered the crowning achievement of high school cross country. She looks to return to Foot Locker Nationals this season, and defend her state title for the third consecutive year, a feat only a few runners in New Jersey history have accomplished.

• The main goal for the team this year is to qualify for the Meet of Champions, last accomplished in 2017, which will require a top-two ranking among Non-Public A schools.

• The team is excited to welcome back track star Ryan Davi '21, who was out with an injury last season, to help them return to the Meet of Champions.

• With Ryan, Nicole, Alina, and Molly Parker '22 making up the top four, the team is positioned to do very well at Shore Coaches Invitational, Ocean State Invitational in Rhode Island, the Somerset County Championships, and the Skyland Conference Championships.

• The team's first meet of the season will take place at Newark Academy on September 7.