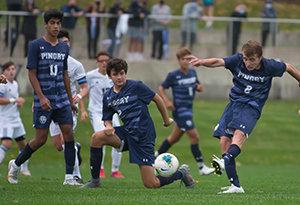 Last season's highlights:
Last year's boys' soccer team (11-2), led by Tristan Sampedro '21, Aidan Gaynor '21, and Anthony Ramlochan '21, was a huge success, especially with the pandemic as a major concern. The team finished with a NJ.com ranking of third in the state and played in the state championship against Gill St. Bernard's, but lost in a very tight 3-2 defeat where one bounce of the ball could have propelled the team to the #1 overall ranking in New Jersey.

What to watch for this season:
● Despite graduating a few key players, such as starting goalkeeper Jake Nicoll '21, who will play for Wake Forest University this fall, the team will be led by captains Cole Morriello '22, Danny Yanez '22, Danny Ittycheria '22, and Lucas Ribeiro '22 who will spearhead a very self-motivated team to challenge other schools for the top ranking in the state again.
● Centerbacks Leon Ma '23, who reached the NJ.com All-Non-Public Second Team, Devan Lalla '22, and starting goalkeeper Mauricio Choussy '22 are also expected to form the core of the team.
● With a similar team to last year's, this year's group of players has high expectations and will not only look to regain the #1 state ranking, but also win the county and state championships.
● Training began in July, with strength and conditioning three days per week. The normal team trip to Europe is unable to occur due to COVID-19, but arrangements were made permitting the team to spend one week in Lake Placid, New York from August 7 to August 14. Preseason begins immediately afterwards.
● Even though the COVID-19 pandemic is not completely over, this year will be extremely different from last year's severely limited season that saw social distancing enforced at all times. Whereas scrimmaging and any sort of possession drills were prohibited last year (only technical work was allowed), they are permitted this season, which seems to be on track in emulating a pre-pandemic one.
● The team will have a tough opening schedule but is up to the challenge, facing Bridgewater at home in their first game on September 9, then Gill St. Bernard's and Hunterdon Central. With last season's only losses coming against Gill St. Bernard's, this season's second game will be one to watch.


Full-court press:
"This group that we have coming back next year is very motivated. They have really bought into the Pingry tradition and really want to make their mark as far as leaving the program on top." - Assistant Coach Scott Aimetti '89