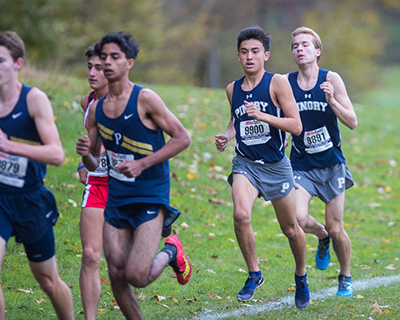 Last season's highlights: The 2018-19 Boys' Varsity Cross Country Team, led by captains Tom Drzik '19 and Jeffrey Xiao '19, had a successful season last year, with a win—for the third consecutive year—at the Prep A Championship and a third-place finish at the Somerset County Championships, marking the highest team finish at that meet in 15 years.

• Led by captains Roger Matthews '20 and Henry Wood '21, the team is preparing for another strong season.

• Coach Horesta's goals for the season include defending their Prep A Championship title for the fourth straight year, matching their finish in the 2018 Somerset County Championships, and breaking into the top five in the Skyland Conference Championship. The team also looks to have a stronger finish next season at the NJSIAA Non-Public A Championship.

• Preparation for the season includes running 400-500 miles during the summer, as well as many of the runners attending a sleep-away running camp to build endurance for the fall.

• Coach Horesta expects there to be nine freshmen joining the team this fall, which is the largest group of freshmen in his 10 years coaching the team. He is confident they will make a strong addition to the team.

Full-court press:
"Winning a team title like the Prep A Championships requires consistency, toughness, and sacrifice sustained over months and years. Seeing kids come together to do what it takes to win is exciting and satisfying. Over the years, the team has always been a true group of friends, and getting to coach kids that like each other and excel together is a great thing."—Head Coach Matt Horesta